The man who made economics freaky 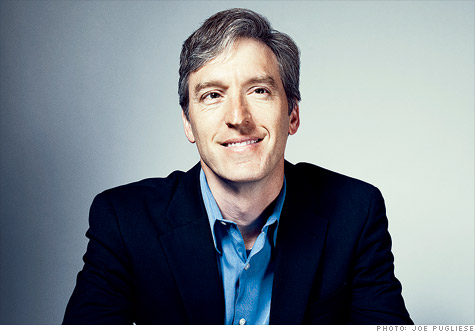 (Money Magazine) -- Had Steven Levitt taught your college Econ 101 lecture, you'd surely remember more of it. The University of Chicago professor takes the basic tools of economics -- reams and reams of data, and the understanding that human beings respond to incentives for gain -- and applies them to surprising new subjects.

In "Freakonomics" and "SuperFreakonomics," his bestselling books written with journalist Stephen Dubner, he's argued that sumo wrestlers probably cheat, explained why many drug dealers earn less than minimum wage, and shown that the introduction of television correlated with a spike in crime.

In one of his few studies about everyday money matters, he made the case that you probably can't rely on your real estate agent's advice to get the best possible price for your house. By turning economics into a good story, Levitt has become his field's greatest popularizer -- the Carl Sagan of number crunchers.

No wonder he was the hands-down readers' choice for this month's Visionaries interview. We asked Levitt to answer your burning economic questions; Money contributing writer David Futrelle chimed in with a few of his own. Edited excerpts follow.

You write about how incentives shape decisions. How do you expect the new health reform to change the way we use health care? --Donna Sako, Taneytown, Md.

The law fails to address any of the important questions about health care. People are not paying on the margin for the health care that they are receiving -- after they pay their premiums, the insurance picks up the tab. When neither the doctors nor the patients are directly paying for health care, people have no incentive to make careful decisions about how to spend money on the margin. That's one reason we spend 15% of GDP on health care.

A reasonable health care reform would shift the incentives so that when I go and get expensive health care, I pay enough of the costs to get me to think twice about whether the benefits outweigh the costs. It makes sense to have catastrophic coverage. That's the idea behind insurance: When someone is unlucky, you don't want that to ruin their life financially. But we as a society often will spend vast sums at the end of a life trying to keep someone alive for an extra month. It's not something society likes to talk about, but I think people should face a tradeoff: Do I want my mother to live another week, or do I want to have enough money to send my kids to college?

That sounds like a very personal version of the death panels we argued about in the last election.

People don't like it, but inevitably we need to think about both the costs and the benefits of health care. We cannot avoid the financial consequences.

The other real problem in the U.S. system is that health care is tied to employment, and that leads to people getting locked into jobs. Everyone agrees that that's not an ideal solution, and the current bill if anything makes the connection stronger rather than weaker. It seems like we did everything wrong with the health care bill.

We'd spend less on medical care if people had healthier lifestyles and avoided heart disease and cancer. Any way to create incentives for that? --J.P., St. Louis

The thing about chronic diseases is that most of the costs fall on the person who's got it. If you have diabetes or heart disease or cancer from smoking, you bear the burden of being ill. It's not so clear there is a role for intervention. You might say we could inform people of the risk, but the research suggests that smokers are well informed. They like to smoke, or they can't help it.

Is there a better way to align CEOs' incentives with the interests of shareholders? --Barbara Allen, Coralville, Iowa

One thing that is not used as often as it should be used is benchmarking the relative performance of the company to other companies in that sector. The reason that we pay CEOs a lot of money is that we believe they have skills.

But there are many factors influencing stock prices that have nothing to do with the skill of the CEO. If the stock market goes up 50% in a year, there's no particular reason the CEO should be compensated for general moves in the S&P 500. An oil company CEO shouldn't be compensated for the fact that the price of oil happens to be high. His compensation should be determined by how well his firm does relative to other energy stocks. It's sensible, and I don't know why it's not used more.

This is a very good reason the government should not bail out companies. If the government is going to be in the business of bailouts, the firms that are eligible for rescue should limit the activities that they engage in. Banks could be banks, and could be bailed out when there are runs on the banks. But we could prohibit them from engaging in particularly risky activities. And there could be another set of companies that could be heavily leveraged, but you wouldn't bail them out.

Maybe the problem is Wall Street ethics. In "Freakonomics" you noted that well-paid folks were more likely to stiff the bagel delivery guy.

Wall Street is populated by a bunch of people whose primary goal is to make money, and the rules are pretty much caveat emptor. You'd be a fool or a deluded idealist to think ethics would be prominent on Wall Street. That is not a statement against people in the money business, just a fact.

You found that paying teachers for students' higher test scores led to cheating. So can incentives work in an area like education? --George "Jeff" Boettner, Shelburne Falls, Mass.

We needn't avoid incentives just because there has been a little cheating. I think the problem with schools is not too many incentives but too few. Because of tenure, teachers' unions, and the fact that teachers generally aren't observed in their classrooms, they can do whatever they want in class.

The easiest way to get around cheating is just to change the rules. At the time when we did the study that uncovered cheating in Chicago schools, the teachers were administering the exams to their students and then looking over the test forms afterward. The solution was to have teachers at one school administer the tests for teachers at another school.

You wrote a blog post recently arguing that it might be a good idea to bribe students to get better grades.

Of course by getting a good education kids are investing in themselves, but kids don't always see the benefits, and so it might make sense to bribe them. My parents bribed me when I was a kid to do well in school -- I think I got paid maybe $25 for each A. I worked harder because of it, and it didn't make me a worse person ... well, who knows, maybe it did. But I think it's sensible to try to motivate kids.

Isn't it also difficult to design incentives to get the behavior you want?

Strong incentives can lead people to respond in the opposite way from what policymakers intended. Taxing garbage by the bag is a classic case. One obvious thing that people do when you start charging them by the bag for garbage is that they stuff the garbage bags a lot fuller -- it's called the "Seattle stomp."

More sinister, instead of putting their garbage bags in the back alley, they throw them out the car window on the side of the road. That is far more costly to society than running a landfill. In Ireland people also try to burn the garbage, which has its own costs, including people who are inept showing up in the emergency room with burns.

How would you donate to charity to make sure the money is going to someone who will use it wisely? --Bob Radisich, Mesa, Ariz.

Unfortunately, the way philanthropy is currently done, it is difficult to know what impact you'll have. Some colleagues and I have started a firm that's trying to revolutionize philanthropy, making it more scientific, more evidence-based. Very few charities engage in measuring their impact in a meaningful way.

In your new book you argue that people are probably even more selfish than we think.

It's complex. The percentage of income people give to charities is on the order of 3%. Research my colleague John List is doing suggests that even when people do give, they don't give willingly except when someone's watching. He's looked at how people react when a person comes to the door asking for a charitable contribution. When he tells people in advance that there will be someone coming at a specific time, people either aren't there or don't open the door.

Social pressure is behind a lot of contributions rather than altruism. If you and I were on TV and you'd just won the lottery and I asked you to give some to children in Haiti, you'd have a very hard time turning me down. But what if I sent you a letter in the mail making the exact same request?