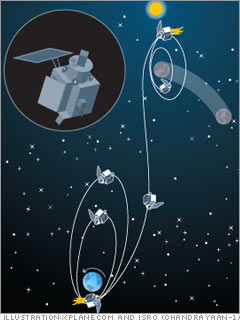 India and China race to the moon
Thought NASA was the only government body planning to tread those dusty lunar craters? Wrong. The world's most populous nations are eyeing them hungrily. "The moon has tremendous commercial potential," says Indian president A.P.J. Abdul Kalam, the former head of his nation's 44-year-old space program. Indeed, the moon is full of minerals and helium-3, a possible future energy source. That's why India's Chandrayaan-1, a robotic spaceship, is scheduled to pay it a flying visit in September. The United States is so impressed with the mission, it's hitching a ride with a radar device that will scan for lunar ice. Not to be outdone, China's $2.6 billion space agency will launch the Chang'E-1 lunar orbiter next year too, part of its plan to put a taikonaut on the moon by 2017 - a year ahead of NASA.
More
Executive wish list