Can Sandy Baruah save the SBA?

President Bush's pick to lead the SBA wins praise for his management style, but has little small-business experience. With less than a year until a new administration takes over Washington, can Baruah make a dent in the SBA's myriad problems? 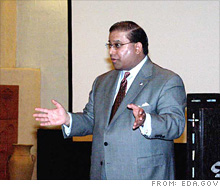 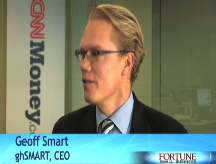 (Fortune Small Business) -- President Bush's recent nomination of Santanu "Sandy" Baruah to head the Small Business Administration (SBA) was met neither by celebrations or jeers in the small business community, but by a resounding "Who?"

For the last two and a half years, Baruah has headed the Economic Development Administration (EDA), a relatively obscure Department of Commerce agency charged with making economic development grants (about $251 million in 2007) to distressed communities in order to foster innovation, entrepreneurship and job growth. While the agency says it created or retained some 52,134 U.S. jobs last year (at a cost of $4,000 per job), because its grants went primarily to government economic-planning agencies and local public works organizations, Baruah remained unknown in the business sector.

By all indications, Baruah is an intelligent and creative administrator, albeit one with little small-business experience. North Dakota Governor John Hoeven, a Republican, recalls that when the EDA made a grant to his state's Centers of Excellence, a partnership that places private-sector engineers in public universities to do research and developement, Baruah dug into the details.

Mario Bognanno, vice president of the Palladium Group, a consultancy that works with the EDA, refers to Baruah as a "21st Century Manager" - one who doesn't dominate meetings, but makes decisive moves.

"At one meeting, he said, 'We might as well get the issues on the table. I know there are differences in opinion around the room,'" Bognanno says. "He gave [participants] license to debate, and at the end he said, 'I understand everybody has an intelligent position but we have to take one and this is it.'"

Before he joined the Bush administration, in 2001, Baruah spent seven years at Performance Consulting Group (PCG), a small Portland, Ore. management consulting shop that advised large companies like Walt Disney World (DIS, Fortune 500), Intel (INTC, Fortune 500) and Key Bank (KEY, Fortune 500). Alan Shiffer, the PCG co-founder who hired Baruah, says that he distinguished himself by having both the sophistication to deal with large clients and the resourcefulness to work in a small business - PCG had about a dozen consultants before it shut down, around 2000. Baruah was also known as an auto fanatic who liked to be in charge of the rental car selection, as well as a snappy dresser.

"He dressed to the T. Everything was perfectly ironed," says Lisa Benson, a former PCG consultant. "I sat at a glass table with him when we were new and I learned some very good organizational skills from him. There was a place for everything, and he knew where it was." Baruah met his wife Lisa at a PCG engagement in Key Bank's Buffalo office, where she worked.

But is Baruah the guy to save the SBA? The agency has seen its budget cut from some $1 billion in 2001 to a proposed $657 million in 2009, and has been battered in recent years by revelations that corporate giants like Lockheed Martin (LMT, Fortune 500) had received billions of dollars in small-business contracts. It's also facing sharp questions about the success rate of its flagship 7(a) loan program, and its controversial set-asides programs.

Some who question President Bush's commitment to small business, like Senator John Kerry (D-Mass.), chairman of the Senate Committee on Small Business and Entrepreneurship, have struck a cautious note.

"The SBA needs strong leadership to fill the shoes left by [former administrator] Steven Preston, and we'll review Sandy Baruah's record carefully to make sure that he is the right person for the job," Kerry said in a written statement.

Tear down the SBA

Others have been openly hostile. American Small Business League president Lloyd Chapman, a longtime critic of the SBA, says, "Sandy has no background, experience or interest in small business. Appointing a guy like Sandy is like appointing a mining engineer to head NASA."

Baruah supporters like Deborah Wince-Smith, president of the Council on Competitiveness think tank, maintain that direct small-business experience - of which Baruah has almost none, save as a consultant - may be overrated.

"I think sometimes we make a mistake thinking that because someone built a small business they would be good in a role like this. A small-business person may not be able to see across the panoply of all small businesses. Every sector is different," Wince-Smith says. And, she notes, "Sandy knows how to get something done with the government and Congress."

In the end, however, Baruah's talents and experience - or lack thereof - may not matter. In January, a new president will come into office, and with him a whole new roster of agency heads. President Bush nominated his first SBA head, Hector Barreto, Jr., three months after taking office, and had him installed in the job by early summer. The Senate has not yet set a date for Baruah's confirmation hearings; until he is confirmed, SBA deputy administrator Jovita Carranza will continue as the agency's acting head.

"If there's anybody that's ready to hit the ground running, it's this guy," says Chuck Gastón, a former SBA district manager who spent 29 years with the agency before leaving in 2003 over frustrations about budget cuts. "But what's he going to do in the limited time he has available? What are you going to do in six months?"

What do you think of Baruah's nomination? Join the discussion.

Are women still 'disadvantaged'?: The SBA says yes, but only in four industries - including kitchen-cabinet making.