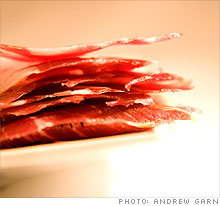 The world's priciest foods
Jamón ibérico de bellota, newly legal for import (at $180 per pound), barely cracks the top five on the pricey foods scale. We checked in with gourmet retailers for the rundown on the world's most expensive culinary indulgences.
View photos

Bellota is rich and nutty and smooth, a power-packed punch of flavor that lingers on the tongue. Never heard of the delicacy, which comes from Spanish hogs that range freely and subsist primarily on acorns? That's because no Spanish slaughterhouse was certified by the USDA for import until 2005. This month the Rogers Collection, a distributor in Portland, Maine, begins importing bellota, making it available in the U.S. for the first time.

"It's the best ham in the world," says chef Terrence Brennan, who will serve it at Picholine in New York City. "Even the fat is delicious. It's right up there with truffles and caviar."

The ham sells for $180 per pound (Kobe beef sells at $100), but Taylor Griffin, owner of the Rogers Collection, is bullish about sales. Famed Spanish chef José Andrés of Café Atlántico in Washington, D.C. - who facilitated the deal between Griffin and his Spanish producer - has already signed up for allotments, as have gourmet food shops such as Zingerman's Delicatessen in Ann Arbor, Mich.

An inside view of Oaxaca's culinary bounty

Fine (art) dining
To write a note to the editor about this article, click here.