How I nearly lost my company - and then got it back.

Paste this link into your favorite RSS desktop reader
See all CNNMoney.com RSS FEEDS (close)
By Scott Wainner, as told to Brandi Stewart
December 23, 2008: 6:49 AM ET
Negotiating with giants 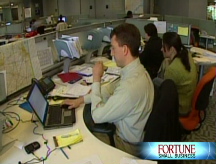 NAPA, CALIF. (Fortune Small Business) -- I launched SysOpt.com as a hobby business back when I was in high school. It was a community for tech-savvy people looking for tips to make their computers run faster.

Around the same time, in the early 1990s, I launched ResellerRatings.com to help consumers identify safe shopping sites. Advertising sales for the two Web sites were earning me an annual profit of $100,000 from my senior year of high school through my sophomore year of college, at which point I dropped out to pursue the businesses full time.

Out of the blue in 1999, an IT-industry Web site called Andover.net offered me hundreds of thousands of dollars to buy SysOpt and ResellerRatings. I was a 20-year-old with dollar signs in my eyes, and I was ecstatic.

To make sure my company was being valued properly, I approached an Andover competitor, EarthWeb, and asked it to name a price for my site. I didn't know how to pit Andover against EarthWeb so I told each party what the other's offer was. Obviously I should have kept that information to myself and just let them keep bidding higher. But in the end EarthWeb won by doubling its initial offer to around $4 million. The buyout was half in stock and cash and half through a structured earn-out based on the growth of SysOpt's page views.

But even though I had spent many stressful months negotiating the sale agreement with the help of a lawyer, the transaction was flawed. I had never sold a company or dealt with that kind of money before, and I was in way over my head.

In the months after the sale, I thought I was set for life. After I got the initial cash payment, I began spending recklessly.

I bought a $65,000 Porsche Boxster and an $11,000 piano. I have never taken piano lessons and can't read music, but I discovered a new talent when I learned to play Beethoven's "Moonlight Sonata" by ear. I also rented a $4,500-a-month house in Sausalito, Calif. for 10 months and let a money manager invest my funds in risky telecom stocks, which were hot at the time.

Unfortunately for me, the EarthWeb deal started to fall apart just a few months later. Remember, I agreed to accept part of the sale price in EarthWeb stock. Initially I thought that was a great idea because the stock was going up. But the deal stipulated that I couldn't sell my shares for at least a year. By that time, EarthWeb's stock had tanked and was almost worthless.

The structured earn-out plan based on traffic growth turned out to be a nightmare as well. When EarthWeb decided to sell its online business (to Internet.com), support for my Websites was cut and I was laid off, which obviously made it impossible to meet the traffic goals that I needed to realize the earn-out.

I was left with only 40% of the money that I'd originally expected from the deal. I blew some of that dough on extravagant purchases, but most of it evaporated in the dot-com bust. In the end, I realized only 10% of the original sale price for my two sites.

I'm an entrepreneur, and when my back is against the wall I go into survival mode. I took EarthWeb to court to dispute the earn-out portion of the transaction. It turned out that EarthWeb was missing months of traffic data. The discovery process turned up internal e-mails suggesting that EarthWeb knew its data were inaccurate. The arbitrator found that EarthWeb did not maintain good traffic records, hadn't supported my sites properly and had violated the earn-out agreement by off-loading SysOpt and ResellerRatings to Internet.com. I was awarded a cash settlement of $628,000.

Next, I fired my money manager and boned up on finance so that I could oversee my own portfolio. I created a SEP IRA account and started saving 50% of my income every month.

In 2003, Internet.com decided to shut down ResellerRatings. I seized the opportunity to buy the site back for less than $50,000, and I successfully relaunched ResellerRatings. Since then, I've started three more Web companies and am posting about $2 million in annual sales with the help of five full-time employees.

Over the years I've fielded several offers from buyers interested in purchasing our various sites. Next time I sell a company, I'll do it right. I now understand the pitfalls of accepting stock and agreeing to earn-outs. (Trust me on this one: Earn-outs are risky and should never be more than 50% of the deal.) I understand what language belongs in a sales agreement, and I have a great attorney. I'm working for myself again and putting money away to secure my financial future.

That first deal? Let's just call it a learning experience.

Do you have tips on selling a company? Join the discussion.

Sales of small businesses on the rise

How to grow fast in down times
To write a note to the editor about this article, click here.