Obama has promised to be a champion of small business. To succeed, he'll need to radically overhaul the Small Business Administration.

The big think: How to fix the SBA
The Small Business Administration has become a quagmire of Washington politics. We asked entrepreneurship experts what Karen Mills should do to fix the agency.
View photos
Growing in a shrinking market 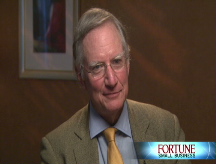 Small biz credit crunch: In their own words
As banks clamp down on lending, companies are struggling to survive. Entrepreneurs around the U.S. wrote in to tell us how they're weathering the turmoil.
View photos

(CNNMoney.com) -- On the campaign trail, President-elect Barack Obama pledged that his efforts to rebuild America's tattered economy would "start with our small businesses on Main Street." Maine businesswoman Karen Mills, Obama's nominee to head the Small Business Administration, will be his point person for that effort. But in a time of tremendous need among small businesses for government assistance, Mills is set to inherit an agency caught in a quagmire.

The SBA is currently failing at its primary mission: getting cash into the hands of business owners. Banks issued fewer SBA-guaranteed loans in 2008 than they did in 2007, when a record 110,000 were made. Unsurprisingly, the biggest drop-off came during the last three months of the calendar year, when the credit crunch entered its most serious phase. During that quarter, banks loaned just $1.94 billion as part of the SBA's biggest loan program, its 7(a) general business loans, down 40% from the prior year's $3.24 billion.

This isn't an isolated or short-term problem, critics say. The agency was widely criticized for its handling of disaster loans following Hurricane Katrina, and it's been repeatedly admonished by Congress for its slipshod oversight of government procurement contracting. By law, the federal government is required to award at least 23% of its contracts to small companies. It chronically falls short of that target, and studies show that billions of dollars spent with large companies are incorrectly counted toward the small-business quota.

Ravaged by years of budget cuts, the SBA is overworked and understaffed. It came in dead last among the 30 large government agencies ranked in the most recent Best Places to Work in the Federal Government list, which measures employee satisfaction and engagement. As small businesses look to Washington for help surviving in a dismal economy, the question is: Can the SBA be saved?

"If I were the incoming president, I would look at totally retooling the Small Business Administration for the 21st century," says Giovanni Coratolo, executive director for the small and mid-market business councils at the U.S. Chamber of Commerce. "Entrepreneurship should be in the name of the agency. That is an integral part of small business."

Coratolo would like the SBA to reflect the United States' transition to a knowledge-based society. Agreeing with him is perhaps the most important person currently doling out advice on the SBA: Fred Hochberg, a Clinton-era agency administrator who is drafting SBA proposals for the Obama transition team. While the transition team would not make him available for an interview, his views are set down in an SBA policy proposal he wrote for the Center for American Progress, a progressive think tank, shortly before joining the transition team.

Hochberg's top priority is to unfreeze the credit market for small businesses. But he also writes that the SBA should "rebuild its downsized and demoralized staff; rethink eligibility requirements for what constitutes a 'small' business; and re-establish federal guidelines for small business contracting terms with federal agencies. Additionally, restoring the agency to cabinet status by executive order will make the agency a central component of economic policy and planning."

The most important part of that plan is elevating the SBA administrator to a cabinet-level position, says Susan Eckerly, vice president for federal public policy at the National Federation of Independent Business.

"The SBA is now viewed as a loan agency," Eckerly says. "Too many people in the federal government have never run a small business, have never met a payroll. Taxes, health care reform, regulatory policy are all relevant to small business. The SBA needs a seat at the table."

That seat would bring representation on the National Economic Council, which is responsible for ensuring that policy recommendations and implementation are in line with the president's overall economic agenda.

Health care reform is likely to get immediate attention from Obama and Mills, and Rep. Nydia Velázquez, D-N.Y., chairwoman of the House Small Business Committee, is ready to champion that cause. "Health care costs are still increasing dramatically and will remain a top priority for small firms for years to come," she says. "The SBA must be at the table when the new administration begins to develop a new health care plan."

One element of the health care proposal put forth by President-elect Obama during the campaign was to require business owners who do not provide employees with health insurance to pay into a national fund that would help uninsured Americans buy private coverage. The plan proposed exempting "the smallest" business owners from this requirement, but did not define "smallest" beyond stating that the exemption would not apply to high-revenue small businesses such as law firms.

The definition of "small business" is an issue that will come up in any attempt to rethink the SBA, in part because the current definition is so broad and chaotic it is essentially meaningless. The most commonly quoted SBA definition is 500 or fewer employees, but that only scratches the surface.

That figure applies only to manufacturing and mining industries, while in most non-manufacturing industries, companies are defined as "small" if they have average annual receipts of $7.5 million or less. Even then, many exceptions exist: The agency's list of size standards runs 37 pages and notes that pencil and art-goods manufacturers are limited to 500 employees, while beet sugar manufacturers can employ 750 workers and petroleum refineries can have up to 1,500 without losing eligibility. Beyond that, different SBA loan programs also have different eligibility standards.

Lloyd Chapman, president and founder of the American Small Business League, argues that the employee count should not exceed 100. Eckerly notes that 80% of the NFIB's members employ 20 or fewer employees.

Get the loans flowing

"First and foremost, we need to fix SBA's loan programs, which should work better in times of economic downturns," Velázquez says. "SBA lending has dropped so far, and so fast, that small businesses have few places to turn right now for financing. Many small businesses are unable to secure credit on affordable terms, and the single most important role the agency can play is making more loans for entrepreneurs as soon as possible."

But there are a number of roadblocks to unfreezing these loans.

One is the fees the SBA charges banks when they make SBA-backed loans. There's two: a loan-guarantee fee that can be passed along to the borrower and a servicing fee that cannot. The SBA's current head, acting administrator Sandy Baruah, notes that by charging the borrowers those fees, the agency cut the cost of SBA loans to taxpayers from $130 million to $0.

That's important for an agency that has had its budget ravaged: The SBA's funding is down from a Clinton-era level of $1.1 billion to a requested $657 million for the 2009 fiscal year.

"We have made the loan program self-financing," Baruah says. "That is classic good government."

Baruah says that that the SBA has already taken several steps to address the recent inability of small businesses to gain access to capital. In November, it issued a temporary rule allowing lenders to base 7(a) loan interest rates on the London Interbank Offered Rate (LIBOR) if they preferred that to the prime rate. The change was made to deal with an unexpected consequence of the financial crisis: The historical spread between LIBOR (the rate at which banks borrow money) and the prime (the rate to which many adjustable-rate mortgages and other loans are fixed) shrank so much that banks were unable to make much - if any - profit on loans. So they stopped lending.

Another bottleneck to getting loans flowing is the relatively small number of banks that issue SBA-backed loans. That number has been dropping steadily - 300 banks have left he program in the past two years, Hochberg says.

The procedure lenders have to go through is so complex "banks have to train someone, and small banks don't do it," says George Mason University's de Rugy. "They don't have the manpower."

In her research, de Rugy found that just 10 large banks have issued more than half of all 7(a) loans in recent years, a fact that leads her to call the loan program "corporate welfare for big banks."

Again, Baruah says the SBA has recently taken steps to address this, beginning with pitching SBA lending to banks as a low-risk use of capital. The agency is also encouraging more community lenders to join its Small/Rural Lender Advantage program to bring 7(a) loans to underserved communities by reviewing and approving those banks' own loan forms and processes, rather than forcing them to switch to the agency's procedures.

"We can get a new lender up and running in 30 days," Baruah says.