Obama's proposed budget allocates more money for the SBA than it has received in recent years, but advocates say there's still a long way to go.

How entrepreneurs are feeling
Starting a business can be an appealing option for laid-off workers - but actually running one is rough in a recession. We polled small business owners to see how they're doing.
View photos
A small town weathers the downturn 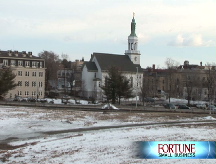 NEW YORK (CNNMoney.com) -- The Small Business Administration is still waiting for a detailed budget and breakdown of its financial priorities for the next fiscal year, but the budget overview President Barack Obama released last week earmarks around $700 million to support the agency in 2010, enough for it to back $28 billion in loans to small businesses.

The money allocated in the 2010 fiscal budget comes on top of the $730 million in funding the SBA received from the stimulus bill, which will support emergency lending initiatives through September 2010.

Though a detailed budget proposal won't be available for several weeks, the $700 million Obama's budget recommends to fund the agency would be enough to sustain the SBA's existing lending and educational programs, and to advance administrative priorities like improving the agency's loan accounting and other IT systems.

"[The budget] is comparatively more than most of the recent years," said SBA spokesman Mike Stamler.

The SBA's budget fluctuates drastically from year to year thanks to the agency's disaster-lending program, which directly makes loans to businesses and homeowners affected by disasters like fires, floods and hurricanes. In years with significant disasters, such as 2005's Hurricane Katrina, the SBA's total budget spikes into the billions.

But the agency's core budget, to fund its administrative programs and its flagship lending initiatives, has been whittled away over the past decade. Programs that once received subsidies, such as the SBA's 7(a) and 504 programs that guarantee a portion of bank loans made to qualifying small companies, are now generally expected to support themselves through the fees they charge participants.

"While this [budget] is an important step, more needs to be done," she said in a statement. "Just as the SBA's programs were not created overnight, we cannot expect that they will be revitalized overnight. Still, I know President Obama shares my commitment to our nation's small businesses and I will work with the administration to ensure that SBA has sufficient resources to perform its mission."

Obama's proposed budget supports up to $17.5 billion in loan guarantees through the SBA's 7(a) program, as part of the $28 billion in small business loans from banks that the SBA is authorized to insure.

That's a higher loan volume than the SBA has backed in any other year this decade. Last year, the SBA backed $12.8 billion in loans through the program, a 12% drop from 2007's total. Reduced demand from entrepreneurs and banks' reluctance to issue small business loans, even with the SBA's guarantees, have contributed to the decline.

Stimulus: What's in it for small biz

Restarting the frozen loans market
To write a note to the editor about this article, click here.