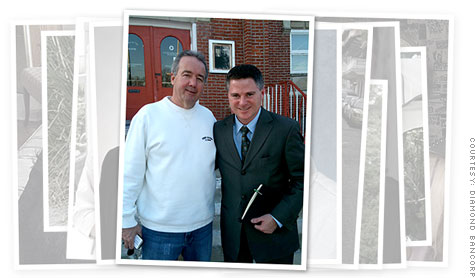 Matt Gambs (right), CEO of Diamond Bancorp in Schaumburg, Ill., and his client, Jim Sugrue, of All Metal Iron Services, who is seeking a loan for a project in nearby Dolton.By Catherine Clifford, staff reporterFebruary 25, 2010: 2:18 PM ET

NEW YORK (CNNMoney.com) -- It's a chicken-and-egg problem that's plagued the credit markets for a year: Small businesses become riskier lending bets in a downturn, prompting banks to slash their lending. But tight credit cuts off the financing companies need to hire and grow, which in turn drags on the economy and causes more businesses to fail.

Hoping to ease the small-business credit crunch, six regulatory agencies recently banded together in a joint statement essentially promising to back off second-guessing banks' loans. "Prudent" small business lending "will not be subject to supervisory criticism," a regulatory group led by the Federal Deposit Insurance Corp (FDIC) said earlier this month.

The move aims to reassure bankers who say they face blowback from government overseers when their loans go bad. Stiffer regulation has caused about half of community banks to pull back on their small business lending, according to a recent poll conducted in January by the Independent Community Bankers of America (ICBA).

There's clear signs that's happening. The percentage of banks that tightened their credit standards for commercial loans to small companies hit a 20-year high in 2009, according to data from the Federal Reserve's quarterly loan-officer survey. Total small business lending dropped 1.8% for the year, removing $14 billion from the market, industry reports show.

"Everybody is walking the line," said Arthur Washington, senior vice president and chief lending officer of Nor-Cal FDC, a California financial development corporation. On the one hand, Washington policymakers urge banks to lend more -- but if loans go bad, regulators blast banks for their underwriting.

Schroeder is happy with new regulatory line-in-the-sand. "The regulatory body at least has recognized that, from the banks' perspective, the regulatory environment is probably too restrictive at this point," he said.

But others say they're waiting to see if local regulators will follow the orders to loosen up.

"We certainly are hopeful that those statements will come to fruition with the examiners in the field," said Bob Epling, president of Community Bank of Florida in Holmstead, Fla. "As of right now, it is a statement, and we haven't seen the end result, which would be the action. ... It is difficult for someone who comes from the outside to truly understand. They don't know the borrower."

The ICBA is also waiting to see what plays out, and wishes the regulators had issued more specific guidance. "We will have to see how it gets applied in the field," said Karen Thomas, the organization's head of government relations and public policy. "There is a lot of room for examiner judgment."

But small business lending is inherently risky, especially when the economy sours. Even the Small Business Administration, which has strict standards for the loans it backs, had to write off 5% of its main loan portfolio last year -- three times the default rate it faced two years earlier.

At commercial banks, things are even grimmer: Bank of America (BAC, Fortune 500) charged off 16% of its small business loan balance in the first nine months of 2009.

When credit constricts too far, though, promising startups can't launch and successful companies can't get financing to expand.

"Many small businesses are still struggling to get loans," President Obama said in a speech earlier this month. "We need to make it easier for them to open their doors, to expand their operations, to hire more workers."

Some banks are starting to heed the call. Huntington Bank (HBAN), a major regional lender in the Midwest, recently announced plans to increase its small business lending by $4 billion over the next three years, reaching as many as 27,000 businesses.

"We want to approve more of the applications that we see. Of the demand that is there, we want to be able to say yes more often," said Mary Navarro, the Columbus, Ohio, bank's head of retail and business banking. "Our intent is to be in the forefront of the turnaround. We see things getting better, or at least not getting any worse."

In many areas of the country, reduced demand is the biggest obstacle to a lending rebound. Business owners won't make capital-intensive investments until they're more optimistic about the economy, bankers say.

"There seems to be a lack of confidence," Epling said of the business owners his Florida community bank serves. "Without confidence that their business will see revenue to pay back the loan, many small business owners are just holding tight."

Larry Bauer, president of Planters & Merchants bank in Gillett, Ark., sees similar patterns among his customers, who largely work in the Mississippi River delta agriculture industry. "There is not a lot of demand for new lending," he said.

But in some areas, especially urban ones, entrepreneurs are eager to borrow -- and bankers say they welcome any help the government can offer to ease credit conditions.

"There are 8,000 community banks out there so you can imagine they are not all going to be in the same situation," said Thomas of the ICBA.

She sees just one solution that will universally help banks boost their small business lending: "We need to get the economy moving again."