IdeaPaint all over your office walls 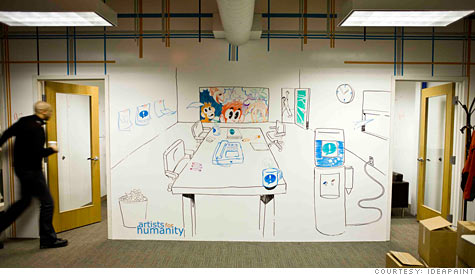 (CNNMoney.com) -- In 2002, a group of Babson College entrepreneurship students ran out of room on their whiteboard. They had spent hours brainstorming new business possibilities, and the sudden space crunch threatened to cramp their creativity.

Instead, it sparked a new idea: Why not make paint that turned walls into giant whiteboards? The ideas kept popping: you could paint chairs, doors, tabletops, playrooms, entire corporate offices. Any surface could be a canvas for inspiration. The company would be called IdeaPaint.

The risk: Finding the right formula was more than half the battle. For three years, former classmates Morgen Newman, John Goscha and Jeff Avallon sought help from specialty paint and chemical coating laboratories. Two labs claimed it was impossible. Whiteboards are made using high-intensity ovens. IdeaPaint needed something that could be applied with a roller in a single coat. That wasn't going to happen, the scientists said.

The young entrepreneurs refused to believe it. "Our joke was, if we could put a man on the moon, we can make dry-erase paint," says Newman, 25.

Then they found CAS-MI Laboratories in Ypsilanti, Mich., where the scientists were willing to give their plan a shot and even cover some of the development costs.

With the help of $1 million from family, friends and a few angel investors, the group spent the next four years fine-tuning their recipe.

Even after the formula was ready, the tiny startup faced big challenges. Manufacturers like Quartet, Acco (ABD), Ghent and GBC had for years ruled whiteboard market, worth $1 billion annually. Rust-Oleum, a century-old paint company, already had its own dry-erase paint on shelves at Target (TGT, Fortune 500) and online at Amazon.com (AMZN, Fortune 500). Unlike IdeaPaint, Rust-Oleum's product is geared to home users and must be applied in multiple coats.

The payoff: When the trio finally launched IdeaPaint in 2008 at an architectural trade show, they painted 3,000 square feet of the Chicago Merchandise Mart and hired muralists to draw on the walls and hand out information to passersby. It struck a chord. Blogs picked up the news and requests flooded in.

"A growing number of architects and painters view it as breakthrough technology," says Phil Maguire, senior category manager for Akzo Nobel, the largest paint and coating company in the world, which now distributes IdeaPaint. Maguire claims it's easier to apply and lasts longer than Rust-Oleum's product.

Bolstered by $9 million from investors, Cambridge, Mass.-based IdeaPaint is seeing double-digit revenue growth each month and has landed honors from BusinessWeek and the now-defunct magazine Metropolitan Home. The paint covers office walls at Comedy Central, the C.I.A., Harvard University and Microsoft (MSFT, Fortune 500). Reebok designers coat their foot mannequins with the paint so they can draw on them. A can of IdeaPaint PRO that covers 50 square feet sells for $199, or $4 per square foot.

"It has the potential to revolutionize the whole industry," says Marcus Wilson, a managing director with Cambridge-based Breakaway Ventures, which invested in the company. Wilson, 37, a former Reebok executive, has since stepped in to become IdeaPaint's chief marketing officer. Former Reebok U.S.A. president Bob Munroe is now IdeaPaint's CEO, and Paul Fireman, who was Reebok's CEO for three decades, is an advisor and investor.

Next up for the 17-employee startup: expanding to hospitals and schools, and selling the paint in retail stores this summer. Newman has been travelling the globe to line up distributors in Europe, India and Australia. His flights are complimentary: He recounted IdeaPaint's backstory in an essay for a British Airways contest and scored a year of free airfare.

Fischman painted a couple of conference room walls after his friends at Breakaway Ventures introduced him to IdeaPaint two years ago. Eventually, he covered the entire office with it. His 225 employees now write on the walls every day.