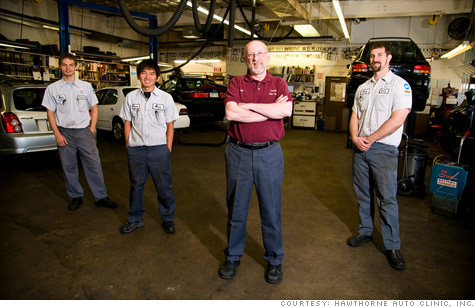 Jim Houser, pictured here with a few of his technicians, has held his staff headcount steady through the downturn. By Catherine Clifford, staff reporterMay 6, 2010: 4:42 PM ET

Companies with fewer than 50 workers added a net 1,000 jobs in April, according to a report released Wednesday from payroll processor ADP. But the upswing actually began last month: ADP (ADP, Fortune 500) revised its March data to reflect a gain of 4,000 positions, marking the first month in nearly two years that small companies expanded their payrolls.

But even as the pink slips have slowed, they've left behind a massive jobs shortfall. Small companies have shed 3 million workers since the recession began, by ADP's count.

In a speech Tuesday before the Business Council, a group of CEOs from major companies, President Obama emphasized the need to rebuild the country's decimated employee rolls.

"Last year, the economy was in freefall. Today, the economy is growing again," Obama said. "Now, by no stretch of the imagination can we declare victory. Not until the millions of our neighbors who are looking for work can find work. ... Spurring job creation and economic expansion continues to be our number-one domestic priority."

Jim Houser, co-owner of Hawthorne Auto Clinic in Portland, Ore., has kept headcount steady at the auto body shop he opened 27 years ago. One longtime employee retired, and an intern was brought on in his place as a full-time worker.

"I have not felt the need to lay anybody off," Houser says -- but he isn't hiring, either.

Like many business owners, he's felt the downturn's effects. Customers facing expensive repairs put them off more frequently. On the flip side, drivers are invested in keeping their vehicles running: "There was a time up until 2008 that if the repair was going to be expensive, they would just go buy another car," he says. "There has been much less of that, so that has been an advantage."

Houser has plans for how his business can grow when the economy strengthens. He'd like to make the equipment and staff investments to install larger batteries in hybrid cars, making them even more fuel efficient.

But the installation is expensive, and Houser won't spend the money to upgrade until he's more optimistic about the stability of the economy. That's a common tactic right now: Recent small business surveys show that few owners are currently making capital investments.

"If people start loosening up with their money on maintenance or these conversions, these upgrades, then I will hire someone," he says. "But I am being very cautious. I don't want to make a big investment that I can't fulfill, that I can't get the returns I hope."

A thousand miles south, in Los Angeles, online marketing company Tesla Consulting opened its doors in October 2008 -- just as the economy really headed off the cliff. Eli Gladden and his two co-founders used a credit card to fund their new firm, which grew fast enough that they've found themselves in the market for new employees. In September, they added a marketing assistant to their staff, and in February, they made their first executive hire, bringing on a business development officer.

"A lot of companies that were in our space and didn't succeed grew so quickly that they weren't in a position to handle a downturn," he says. "No one really ever thought about building a business that could scale back down. We are being really careful about bringing in new people, because we want to build a stable company that can weather storms if it has to."

That estimate is wildly different from ADP's, but both surveys point to signs that for the job market, the worst is past.

And Gladden points to one silver lining to the carnage of the past two years: Companies can scoop up talented, eager workers.

"There are all these people we have worked with that are available," he says. "If we need somebody, we know we can go out and get somebody who is going to add value right away."

Main Street left out of recovery