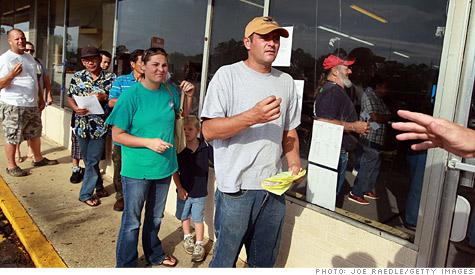 NEW YORK (CNNMoney.com) -- BP's oil spill has cut thousands of workers across the Gulf Coast off from their livelihoods -- and the tab is growing fast. The company has spent more than $40 million so far making payments on 15,000 of the nearly 32,000 loss of income claims filed by area business owners and their workers.

The best data snapshot of the industries affected by the accident comes from Florida, which is releasing a daily tally of the claims filed against BP filed in the state. Alongside the expected casualties -- 126 shrimpers, 196 oyster harvesters, 239 charter boat operators have claimed losses -- are some more surprising signs of the disaster's ripple effects.

Florida's real-estate market is taking a hit. As of Thursday, BP had cut checks totaling $75,725 to start settling some of the 446 claims against it for lost income on area rental properties. BP (BP) disbursed another $5,000 to cover real-estate sales losses.

And if commercial fishermen can't fish, there's no work for those who fix their boats and distribute their catch. Thursday's report included 16 claims from marine repair businesses in Florida for lost income, with $10,000 paid out so far by BP. Seven wholesale distributors had filed claims, on which BP has paid $5,000.

Three other states -- Louisiana, Alabama and Mississippi -- are also hosting centers processing claims for the thousands of area residents now stuck without paychecks. But only Florida is releasing detailed records of how those claims break down by industry.

Representatives of Louisiana's oil spill command center had no information at hand on their states' income-loss claims. Mississippi had the aggregate number -- BP has paid out 3,518 claims so far totaling $4.8 million -- but more granular detail was not readily available, according to a spokeswoman at the Mississippi Department of Marine Resources. And Alabama's oil response information center said that 6,528 claims have been filed so far, but representatives there had no further details on the occupations of those filing the claims.

BP also did not have state-by-state information readily available, according to a spokesman. The company is adding thousands of new claims to its queue each day: 510 claims adjusters are staffing 22 centers across the four states.

The deluge of wage and income loss claims against BP won't slow any time soon.

As of Thursday, the National Oceanic and Atmospheric Administration had closed 37% of the federal waters in the Gulf of Mexico, a number that creeps up higher each day. While states control the handful of nautical miles closest to their coastlines, the federal government regulates the Gulf from the state lines through to international waters, which begin 200 nautical miles out. With so many fishing grounds shut down, crabbers, shrimpers, oystermen, charter-boat operators and others who rely on the sea to ply their trade are unable to work.

BP CEO Tony Hayward is promising to make good on all losses. "We will honor all legitimate claims, and our clean-up efforts will not come at any cost to taxpayers," Hayward says in a TV commercial the oil company has been running.

But paying for lost wages is not enough, some state officials say. Several Louisiana state agencies wrote a joint letter to BP last week requesting that the company set up a fund, starting with $300 million, to help the state mitigate the short- and long-term effects of the oil spill on its local economies. That includes a forecast increase in the need for public services.

"Impacted communities currently are experiencing significant increases in unemployment, and facing fewer opportunities for short- and long-term employment and the loss of industry-based economies potentially for a long period of time," the letter says.

The $40 million BP has paid so far on loss-of-income claims is sure to skyrocket, but it's still only a small piece of the Deepwater Horizon accident's ultimate costs. BP estimated this week that it has already spend $990 million on the clean-up efforts -- and the leak continues pumping an estimated 19,000 barrels of oil a day into the Gulf waters.