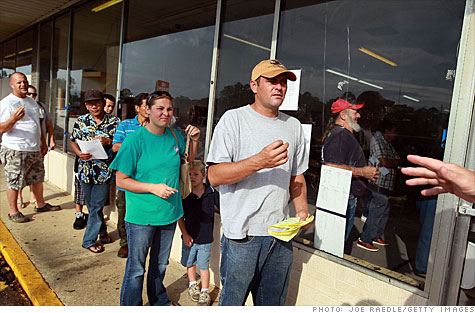 People wait in line to file claims with BP at an office in Alabama. By Catherine Clifford, staff reporterJuly 9, 2010: 2:15 PM ET

NEW YORK (CNNMoney.com) -- BP is becoming increasingly stringent with its demands for documentation from victims filing claims for lost wages and income in the Gulf region.

Immediately following the spill, many initial payments were distributed in uniform amounts with minimum documentation based on estimates. Now, BP will make payments based on each claimants' documented losses.

As a result of the tightened standards, some claimants could get more money than the standardized industry check they have been receiving while others could get less.

And those claimants that are already in the claims system but have yet to submit the necessary documentation will get a $1,000 "good faith" check for July as they continue to gather papers, but they will not get full payment until proper documentation has been submitted.

Once a claimant submits the necessary documents, if they show that the victim is due more than the $1,000 advance payment for July, BP said it will provide a supplemental payment to make up the difference.

Claimants can submit documentation - tax returns, trip tickets or pay stubs - to BP through the mail, by fax or at one of the 35 claims offices located throughout the Gulf.

"If individuals have not given us supporting documents, we need them," said Darryl Willis of BP's Claims Team, in a company statement released Wednesday. "For many it has been 45 to 60 days, and we would like to ensure that we are paying them for the income they have lost."

There will be no "good faith" payments after July. To be paid in August and beyond, claimants must provide verification of their income with documentation.

BP is not shutting the door on filers, however. If a claimant gets all of the documentation together in October for losses incurred in June, for example, BP will honor the backdated claim. "From our point of view, people can backdate claims as long as they want," said Max McGahan, BP spokesperson. "If they have documentation, we will pay out the claims."

Even if BP is patient, however, a claimant needs to be aware of local statute of limitation laws, which vary on a state-by-state basis.

In the first months after the oil spill, BP cut checks to victims based on estimates without requiring extensive documentation. For example, boat captains that ran a crew got a $5,000 initial check and deckhands got $2,500. But starting with advance checks cut for July, dollar amounts will be much more specific.

"We are going to make a more precise payment which reflects their actual loss," said McGahan. Checks "will also reflect the seasonality of the fishing industry."

Fishermen earn the bulk of their annual pay in a few peak months that vary depending on the particular seafood being caught. When they submit their paperwork, those variations will be accounted for.

BP has paid out $157.6 million in nearly 51,000 checks as of Thursday. More than 100,000 total claims have been submitted to BP, but meanwhile, more than 45,000 claims are sidelined, awaiting further documentation.

As BP tightens its demand for documentation, the company insists it is not trying to shortchange any claimants.

"The idea is not to reduce how much we are paying out in claims. We are trying to make a more sophisticated system," said McGahan. "To do that, we need some documentation; it has to be based on something."

Even as BP works to refine its process, it won't be in charge for that much longer. The former special master of the September 11th Victim Compensation Fund, Kenneth Feinberg, has been appointed to oversee the claims process.