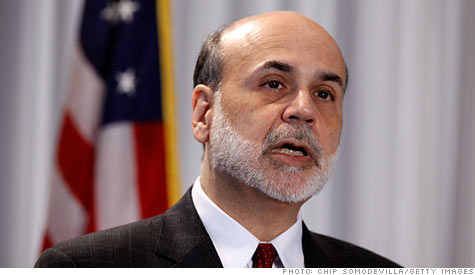 CNNMoney.com (NEW YORK) -- In the last two years, $40 billion worth of loans to small businesses have evaporated, and correcting the problem should be "front and center among our current policy challenges," Ben Bernanke, chairman of the Federal Reserve, said in a speech Monday.

Bernanke, who was speaking at the day-long forum "Addressing the Financial Needs of Small Businesses" at the Federal Reserve, said that there are several factors behind the contraction in small businesses lending.

He cited weaker demand from Main Street businesses worried about taking on more debt during tough times, "deterioration in the financial condition of small businesses during the economic downturn," and a lack of supply of available credit.

"Clearly, though, to support the recovery, we need to find ways to ensure that creditworthy borrowers have access to needed loans," Bernanke said.

Monday's forum is the finale of a series of more than 40 roundtable meetings around the country between small businesses, lenders, bank regulators, trade associations and government officials that aimed to determine how best to help Main Street businesses that can't get the credit they need.

Throughout the dozens of forums, a couple issues came up repeatedly. In particular, banks noted they are stuck between a rock and a hard place. On the one hand, banks are being told to increase their small businesses lending, while on the other hand bank regulators are telling banks to tighten lending standards.

"We take this issue very seriously," said Bernanke. "Our message is clear: Consistent with maintaining appropriately prudent standards, lenders should do all they can to meet the needs of creditworthy borrowers. Doing so is good for the borrower, good for the lender, and good for our economy."

"As one business owner at the Detroit meeting I attended put it, 'If you thought housing had declined in value, take a look at what equipment is worth,'" said Bernanke.

Hire an employee, get a loan break