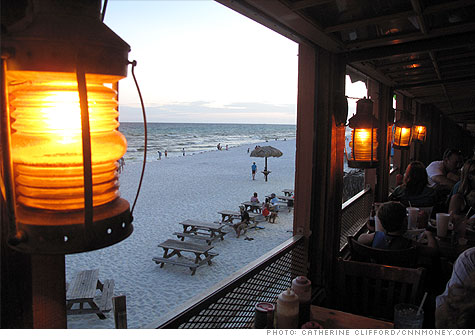 Beach-front businesses like the Back Porch in Destin, Fla., are suffering a slow down in the typically busy summer season due to a pullback in tourism. By Catherine Clifford, staff reporterJuly 28, 2010: 8:39 AM ET

DESTIN, Fla. (CNNMoney.com) -- Wednesday marks the 100th day since the oil spill began, and business owners across the Gulf Coast who've seen the tourists disappear hope that somehow the next 100 days will get better.

The man in charge of making that happen is oil spill czar Kenneth Feinberg, the former special master of the 9/11 Victim Compensation Fund. He's in Destin, Fla., on Wednesday meeting with jittery business owners to explain just how he plans to use the $20 billion fund set up by BP to pay for "legitimate" claims.

For many businesses in this region of the Gulf, it isn't the oil that has hurt them the most, it's tourist anxiety. When vacationers are jittery they book trips elsewhere, even if there's no oil on the beach. And according to Feinberg, these types of claims will be some of the toughest to fulfill.

On Tuesday evening, there was no tar on the beach near the Back Porch, a seafood and oyster house located on the beach front in Destin, but also missing were the tourists.

"It is not going to be a typical summer," said Buddy Marler, one of the managers at the seaside restaurant, looking out over the beachfront bar where about 30 to 40 people waited for a table. Normally, Marler says, he'd expect closer to 200 people to be waiting for a table on a Tuesday in the summer.

Revenue is down between 10% and 20% at his establishment this summer, Marler said.

Still, despite their uncertainties and because of non-refundable deposits they don't want to lose, some visitors have decided to vacation in Destin. They have a great time, said Marler. But overall, summer 2010 isn't looking great.

Toni Richardson, a resident of Okaloosa Island, a neighboring beach to Destin, said the nail salon she visits is "dying on the vine." She says the owner is beside herself because she depends on tourism dollars.

Richardson has lived on Okaloosa Island since August of 2006. She has noticed a drop off in the number of tourists this year, "absolutely, without a doubt." While there have been sporadic tar balls on the beaches in this area, Richardson said that the sentiment in community meetings is that the media "blows it out of proportion."

Businesses in the region hope that the fear wanes and tourists return in full force next summer.

But for now, they are concerned with how they'll get paid, and they're not too sure who's most to blame for keeping the tourists away.

"Do you blame BP for the oil spill or do you blame the media for putting out the word?" asked Marler at the Back Porch.