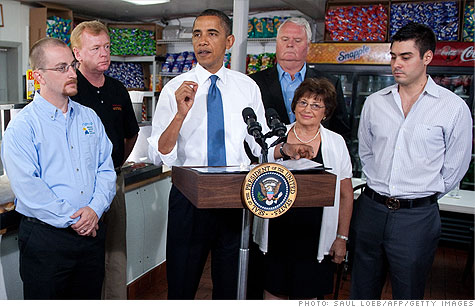 NEW YORK (CNNMoney.com) -- As mom-and-pop businesses struggle to make ends meet, the latest attempt to help them has gotten mired in Washington politics.

The debate began in October, when President Obama started pushing ways to get cheap capital to small businesses. It continued after his State of the Union address, in which he touted the proposal.

But that didn't go anywhere because of stiff congressional opposition to using money from the TARP bank bailout fund.

Now nearly two months after the administration proposed a new multibillion dollar package of loans and tax credits -- with its ties to TARP stripped out -- the effort to help small businesses has hit a wall.

At the earliest, the Small Business Jobs and Credit Act will be taken up in September.

Meanwhile many entrepreneurs, who've been treading water for months, are afraid of going under.

Here's what's at stake in the latest tale of Washington gridlock.

What's in the bill?

The bill currently stuck in the Senate authorizes the creation of a $30 billion lending fund. Treasury would run the program, which would deliver ultra-cheap capital to community banks, defined as those with less than $10 billion in total assets.

The idea is that community banks are the ones that do the lion's share of lending to small businesses and so by pumping capital into them, it will get in the hands of Main Street businesses.

Other key components of the bill would provide $12 billion worth of tax relief for small businesses between 2010 and 2020, according to a preliminary estimate from the Joint Committee on Taxation.

The bill also increases Small Business Administration loan limits and extends loan sweeteners through the end of the year. It offers a slew of tax cuts for small businesses, to both encourage investment and entrepreneurship.

And the legislation provides $1.5 billion in grants to state lending programs that can't turn to empty state coffers for more cash.

Why does the bill matter?

With the unemployment rate hovering right around 10%, the administration is under constant pressure to create jobs. Small businesses are key job generators: They create two out of three new private sector jobs in the country, by the government's account.

From the start of the recession, loans to small businesses dropped from more than $710 billion in the second quarter of 2008 to less than $670 billion in the first quarter of 2010, according to bank financial reports submitted to the Federal Financial Institutions Examination Council. Ben Bernanke, chairman of the Federal Reserve, said last month that correcting the problem should be "front and center among our current policy challenges."

Some of the $40 billion decrease in small business lending is due to weaker demand and a weaker financial system, said Bernanke. "Clearly, though, to support the recovery, we need to find ways to ensure that creditworthy borrowers have access to needed loans."