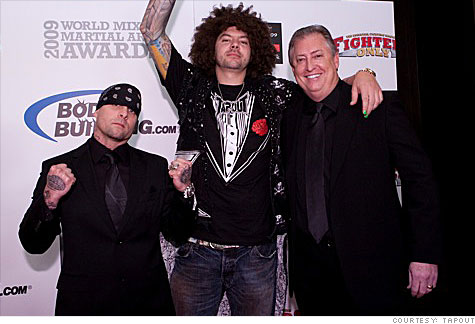 (CNNMoney.com) -- It's not every day you meet a chief executive officer named "Punkass." Especially one who runs a $200 million company.

The heavily tattooed, bandana-wearing CEO fits right in at TapouT, a 140-employee clothing company in Grand Terrace, Calif., that caters to athletes and fans of mixed martial arts, a combat sport known for its brutality.

Apart from the name, what makes Punkass and his co-founders unique is the commitment they made more than a decade ago to a sport that was then virtually unknown. They took a gamble on a market that barely existed.

Back in 1997, TapouT's three co-founders -- Dan "Punkass" Caldwell, Charles "Mask" Lewis and Tim "Skyskrape" Katz -- had no college degrees and little money. But all three had trained in mixed martial arts and were ardent fans of the sport. They were confident that someday, the sport would be accepted -- even embraced -- by a mainstream audience.

So they took the kind of leap that would make little sense to anyone but their fellow true believers: They maxed out their credit cards to start a small operation selling t-shirts at underground mixed martial arts competitions.

Back then, mixed martial arts was still a fledgling movement, well under the radar of other apparel companies. Today, it's almost as mainstream as boxing -- and TapouT's block-letter logo has become synonymous with the sport.

The company sponsors well-known fighters like Vladimir "The Janitor" Matyushenko and Thiago "Pitbull" Alves. (Along with tattoos and bulging biceps, nicknames are a must-have for practitioners of mixed martial arts). TapouT also sells clothing, mouth guards, nutritional supplements and other branded goods online and at retail chains including Macy's and Champs Sports.

All those t-shirts and vitamins add up fast. Last year, TapouT raked in $200 million in annual revenue -- more than 16 times its $12 million revenue in 2006.

So how does TapouT keep the mixed martial arts market in a headlock? Customers say it's the early relationship the company developed with both fighters and fans.

"They've been right in the mix from the beginning," says Andrew Lang, co-owner of Lightning MMA, a mixed martial arts gym in Laguna Hills, Calif. "Those three guys were at all the events -- they have this presence, this rapport with the fighters."

In the late '90s, TapouT sponsored fledgling fighters for $300 a pop. Nowadays, sponsorships cost anywhere from $3,000 to $1 million.

"We have a full team dealing with our fighters and their managers 24/7," says Punkass. "We're worried about their personal lives, too. How's their new baby? How do they feel after a fight?"

The goal is to get fighters to wear TapouT gear in and out of the ring. That, in turn, has given the company mass appeal among fans -- which come mainly from the sought-after 18- to 34-year-old male demographic.

"I don't know who's more fanatic, mixed martial arts people or NASCAR people," says Marshal Cohen, chief industry analyst at the NPD Group, a market research firm. "But in either case, when you're that fanatical there is a tremendous allegiance to a brand, and it's all about the lifestyle. It's almost like a club."

To make sure that club keeps growing, Punkass, Mask and Skyskrape brought a seasoned entrepreneur, Marc Kreiner, on board in 2006. Kreiner had a varied background -- he launched disco bands in the '70s and more recently started an infomercial company -- but he helped bring TapouT products to over 20,000 stores worldwide. He also inked a handful of licensing agreements, including a line of TapouT-branded supplements with Champion Nutrition.

But TapouT's evolution had its low ebbs. In 2009, co-founder Mask -- known for his big personality and signature face paint -- died in a car crash. Kreiner, Punkass and Skrape were leveled by the loss of their friend and colleague. Many TapouT employees got commemorative tattoos in Mask's honor with the word "believe."

Punkass says that Mask's death has been the company's biggest challenge to date. But TapouT has other, less tragic troubles. While mixed martial arts has toned down the violence a bit in recent years -- the rules, for example, no longer permit biting and eye-gouging -- some lingering controversy about the sport's roughness could limit the growth of its fanbase, which is TapouT's main audience.

A handful of smaller companies have also entered in the mixed martial arts apparel industry, including Dethrone Royalty Clothing and Hitman Fight Gear. But when it comes to the competition, TapouT's main threat is much bigger players, like Nike and Adidas.

So could TapouT be the next sports apparel giant, akin to Under Armour?

It's unlikely, suggests Cohen, the NPD Group analyst. But for the moment, at least, the company doesn't have significant competitors vying for a share of the same market, he notes. And there's plenty of room to grow: The overall sports apparel market rakes in $12 billion a year in the United States alone.

As TapouT lends its name to more and more products, the company runs the risk of diluting its brand and losing "street cred" with its loyal fan base. But Punkass isn't worried about that.

"I don't see ourselves making TapouT Ken and Barbie dolls anytime soon," he says. "We won't make a product unless it connects to our core audience. We stay true to the brand."

Q&A with 'Mask' from TapouT