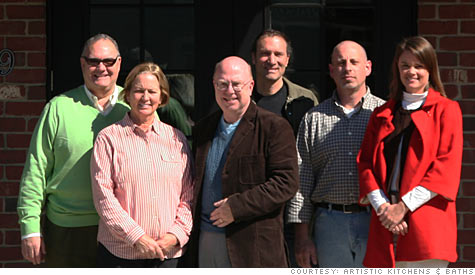 NEW YORK (CNNMoney.com) -- Across the country, small businesses are talking to their accountants about a hefty tax credit that could make health insurance a little more affordable.

Six months after sweeping health care reform was enacted, the cost of health insurance remains one of the most pressing issues facing small businesses. Premiums typically run 18% higher for small businesses than for larger companies.

The health care law called for the expansion of state-run exchanges aimed at helping small businesses find affordable coverage. But not until 2014. To bridge the gap, the law also established a slew of significant tax credits to small firms starting this year.

The Internal Revenue Service has sent out millions of post cards to business owners and tax professionals alerting them to the tax credit. Business owners are still working to get their heads around the details, but it's a bit of bright news for those who'll qualify.

"That would be fantastic," said John Wilson, owner of Artistic Kitchens and Baths, a cabinetry and interior design business in Southern Pines, N.C. Wilson pays 80% of the cost of insurance for six of his twelve full-time employees. The other six employees opt for insurance through other avenues, such as their spouse's plan. "Health care costs are really, really high and that has been a big, big problem," said Wilson.

How it works: Almost 17 million people work for businesses that are in firms that will be eligible for the tax credit between now and 2013, according to analysis from the Commonwealth Fund, a private health care research group.

The credit is phased, and the largest one is offered to the smallest of small businesses. More than 4 million firms will be eligible for the credits, according to a report from Families USA and Small Business Majority.

To get the credit, a business must have fewer than 25 full-time workers or the equivalent (the hours worked by part-timers count), pay an average annual wage of less than $50,000 and cover at least half the cost of health insurance premiums for their workers.

There are a few additional restrictions, including caps on how high qualifying premiums can be. In addition, the credit works on a sliding scale: Businesses with fewer than 10 employees and average wages less than $25,000 can max it out, while larger firms and those with higher payrolls collect a reduced credit.

For-profit companies use the credit to offset the federal income taxes they pay for the year. Any unused portion of the credit can be carried forward for up to 20 years to reduce future taxes. Tax-exempt organizations are eligible for a refundable tax credit, although the percentage credit they get is slightly smaller.

Looking ahead: The tax credits are a temporary solution until small companies can shop on insurance exchanges.

States will start implementing the insurance pools in 2014, but it could be two more years until every state has an exchange set up to accommodate businesses with up to 100 employees, according to the Commonwealth Fund.

For businesses with 25 or fewer employees, the tax credits are a big help. But bigger firms will have to wait for the exchanges.

Marco Lentini is the founder and president of Avanti Food Corp., a holding company for five Philadelphia restaurants. He has between 65 and 70 workers between his four health food cafés, all called Gia Pronto, and one pizzeria, Taglio.

"I am going to be in business more than the next 6 years so what does it look like after that," said Lentini. "I tend to be more fixated on that." Furthermore, unless he were willing to break down his business into smaller parts, his headcount is too high to qualify for the breaks.

Lentini, like many small business owners, is bit nervous about what it will cost him to buy into the insurance pools. But he is optimistic about the reform.

"How do I take advantage of this change and use it to actually fill a goal of mine which is to be able to provide insurance to all our employees?" Currently, Lentini only offers health insurance to 10 managers.

It will be years before the health reform has been fully rolled out.

"I think the health care is a work in progress really," said Wilson, the owner of Artistic Kitchens and Baths in North Carolina. "It is going to take time to create a really powerful health care system that works."