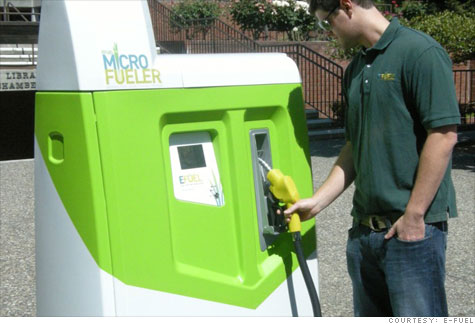 Entrepreneur Thomas Quinn hopes his E-Fuel system will catch on as a way to turn trash into "flex fuel" for cars. By Eilene Zimmerman, contributing writerFebruary 11, 2011: 5:33 AM ET

What if you could fill up your car's gas tank with fuel you made at home from food scraps, old newspaper and the remains of last night's Cabernet?

That's the idea behind E-Fuel, a 25-employee Silicon Valley startup that recently started selling a small-scale ethanol production system for turning household compost into high-octane homebrew. Such compost is abundant: Americans throw away some 30 million tons of food scraps each year.

E-Fuel is the brainchild of Thomas Quinn, a former president of the networking giant Novell (NOVL), whose last company, Gyration, developed and patented the motion controller for the Nintendo Wii. So how does his fuel system work?

It's based on two primary units, each about the size of a washing machine. The first component, called the MicroFusion Reactor, reduces organic waste to sugar water, then ferments it into a soup of alcohol, water and bacteria. The second part, called the MicroFueler, processes this beery mixture into ethanol.

E-Fuel has also released a third component, a portable generator called the GridBuster, powered by a combustion engine. The heat exiting the GridBuster can be recaptured and used to power the reactor and fueler. Using that heat provides 80% to 90% of the power needed to run E-Fuel's system.

Quinn became interested in the idea of an all-organic, renewable energy solution in 2006, when he saw the world's fuel consumption hitting record, unsustainable levels. "I could see this future disruption coming in the energy market," he says.

To bring his system to life, Quinn enlisted Floyd Butterfield, a celebrity in the world of ethanol. In 1982 Butterfield won the California Fuel Alcohol Plant Design Competition for his ethanol still, known as The Butterfield Still.

Each of E-Fuel's components costs about $10,000. E-Fuel is already shipping its MicroFueler and GridBuster, largely to universities and the government, but also to breweries and some individuals. The company is fielding presales for its the MicroFusion Reactor, with plans to start shipping it in the second quarter of this year.

Most consumers aren't going to shell out five figures to construct their own personal ethanol processing plant -- but E-Fuel thinks they might lease units from local distributors. Those who opt to lease or buy only a MicroFueler will get deliveries of the beery, pre-ethanol liquid from their distributor.

So far, sales are between $5 million and $10 million, according to Quinn. That figure includes the sale of more than 70 units and an undisclosed number of distributorships, both in the U.S. and overseas.

Chris Ursitti runs the distributorship for Southern California through his company GreenHouse Holdings, in San Diego. Using a MicroFueler, he's been making ethanol with waste wine from local wineries and putting it in his hybrid Lexus RX 400H, which he converted to a flex fuel vehicle. While all cars can run on gasoline that uses ethanol as an additive, cars that run on flex fuel -- which is up to 85% ethanol -- can make the move to E-Fuel's ethanol without a hitch. Cars that don't run on flex fuel require the installation of an adapter.

"You actually get better performance out of the car because it's higher octane," Ursitti says. "It's peppier."

This summer, Foodlink, a food bank in Rochester, N.Y., launched a pilot program with E-Fuel's system. Two of Foodlink's top five recurring expenses are waste disposal and fuel. Now Foodlink takes its waste -- everything from pineapple tops and damaged produce to expired milk -- and turns several tons of it into ethanol each day, generating 100 gallons of fuel each week.

The food bank partnered with Graham Fennie, the founder of an E-Fuel distributor called Epiphergy. Together, they plan to scale up and generate at least 500,000 gallons of fuel a year.

"E-Fuel's machines aren't cheap, but for early adopters of new technology like this, I think cost really isn't the issue," says ethanol expert David Blume, executive director of The International Institute for Ecological Agriculture and author of Alcohol Can Be A Gas! Blume believes E-Fuel's products will fill a market niche, appealing to those consumers who are determined to find an alternative to gasoline, no matter what the cost.

But he also predicts that E-Fuel will face competition from ethanol entrepreneurs. "I think there will be slightly bigger stills coming onto the scene," he says. "Those who can make 50,000 to 100,000 gallons a year will start their own ethanol businesses, selling to their neighbors and the community."

E-Fuel currently has a backlog of orders from distributors and individuals waiting to be filled. Quinn expects sales to double in 2011 because of rising oil and gas prices.

The company's biggest challenge is finding enough cash to fund its growth. E-Fuel has already taken in $10 million in startup capital, running on money from Quinn's own coffers, investments from distributors and government loans, but is now trying to raise $25 million from investors.

"In this economy, finding capital is impossible," Quinn says. "Banks aren't taking any risks and we're facing a green tech bubble that's popping, because investors have dumped so much money into solar and wind and haven't seen returns," he says. As a result, E-Fuel has grown much more slowly than Quinn would like.

But as a longtime believer in disruptive technologies, he's optimistic about the future.

"Paradigm shifts like this take a while to get traction," he says. "But then all of sudden, it will just take off."