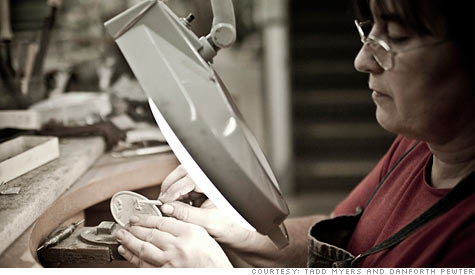 A worker at Danforth Pewter finishing work on a barrette. Danforth is one of many small businesses having to raise prices to deal with sharp increases in their costs. By Chris Isidore, senior writerMarch 31, 2011: 8:27 AM ET

NEW YORK (CNNMoney) -- Prices are going up all over Main Street.

Still reeling from the recession, most mom-and-pop shops have held off on raising prices for fear of losing more customers. But business is finally starting to pick up, and after years of being squeezed by cost increases, a growing number of small businesses are hiking their prices.

"They've been squeezed so badly for the last two years, any uptick in demand means they're going to try to raise prices a bit," said William Dennis, senior research fellow with the National Federation of Independent Business.

Q Kindness Café is one of those businesses. With the cost of everything from coffee to linen service to meat steadily rising, the St. Paul, Minn., diner was forced to raise prices on its menu.

"Business is definitely still soft. But we've gotten the screws turned on us from our suppliers," said owner Lisa Metwaly. "We had no other choice. I just hope we don't chase any more customers away."

Metwaly said so far she hasn't had any complaints or seen any drop off in business from the hikes, which raised the price of a typical entrée by 50 cents to about $6.50.

Restaurants aren't the only businesses being affected.

Danforth Pewter, a small Vermont manufacturer of jewelry, ornaments and oil lamps made of pewter, just announced higher prices for its wholesale customers after the price of tin -- its key raw material -- doubled over the last six months, thanks to rising demand in China. (Tin is used in many electronic devices.)

"China is absorbing more and more of the global tin market, driving up prices," said Bram Kleppner, the company's CEO.

Kleppner said the company has seen some improvement in sales recently, but demand is still not back to pre-recession levels.

"Higher-end gifts are one of the first discretionary purchases to disappear in a recession," he said.

The company's price increase averages out to about 6%.

"With every single category that we increase prices on, there is a painful debate about what the consumer reaction will be, what it will feel like on the shelf," he said.

A survey of small businesses by PNC Financial found that 37% expect to raise prices over the next six months, while only 7% said they would reduce prices. That's the widest disparity since the early months of the recession.

"Every time their costs go up, they think about raising prices," said Stuart Hoffman, PNC's chief economist. "The question is how much of this will be able to stick."

Stronger consumer spending in recent months might help businesses pass along their costs, Hoffman said. But it's not strong demand that's driving prices higher. Only 16% of those raising prices pointed to demand as the reason for the increase, while 82% blamed rising input costs.

Small businesses expect far more inflation ahead than the typical economist. The survey found a majority believe prices to be up between 4% to 6% this year, far above the forecast from the Federal Reserve of inflation in the 1.3% and 1.7% range.

The typical small business has trouble with price hikes, and closely watches their competition when trying to decide on what their customers will accept, according to Mark Stiving, CEO of Pragmatic Pricing, a pricing consultant with many small business clients.

"Small companies tend to have a very hard time raising prices because big companies won't follow them," he said. (8 great cities to start a business)

Losing business is a risk for Lesley Hall, a hairstylist in Westwood, Calif., who just raised her prices for the first time since 2008 because of her own personal budget squeeze. To cover her living expenses, she's had to raise the price of a typical session to $68 from $60.

"I have a lot of anxiety about doing it," she said. "There's a tension between the need to raise your prices to survive and not chasing customers away."

Consumers jittery about inflation and income