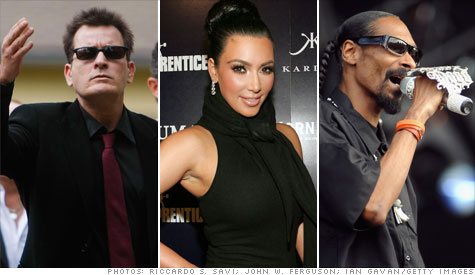 NEW YORK (CNNMoney) -- Charlie Sheen's 20-city "Violent Torpedo of Truth" tour might be off to a rough start -- but the guys who helped turn his tweets into gold are watching their business take off like a rocket.

Charlie Sheen's shenanigans brought Ad.ly -- a startup in Beverly Hills, Calif., -- into the spotlight during his heated battle with the producers of "Two and A Half Men."

Business has ramped up since the actor came aboard, said Sean Rad, Ad.ly's president and founder.

Rad started the company in 2009 based on the idea of using Twitter and Facebook to form a marketing connection between celebrities, with their legions of Twitter followers, and companies vying for the attention of those consumers.

In a nutshell, Ad.ly pays celebrities to tweet for sponsors.

Rad said he raised $6 million worth of angel funding from GRP Partners in Los Angeles and Greycroft Partners in New York, connections that he made through the founding of a webmail service company called Orgoo, which is no longer in business.

Getting Sheen was a win for the firm.

The contentious actor approached Ad.ly in March, looking for ways to effectively communicate to his fans via his outrageously popular Twitter feeds.

He gained a million followers on the first day he joined Twitter, breaking a record. The public had become fascinated with his erratic behavior during televised interviews, in which he openly bragged about smoking crack cocaine and living with two girlfriends.

By March 7, he was fired from his job and had already invented buzz words like "warlock" and "winning," and other catchphrases that seemed tailor-made for social media.

"Sheen was saying 'tiger blood' on TV and then it turned into a trending topic on Twitter," said Ad.ly CEO Arnie Gullov-Singh.

Rad and Gullov-Singh decided to broker a deal between the actor and Internships.com.

When Sheen tweeted about how he was looking for "a #winning INTERN with #TigerBlood," Ad.ly paid the actor "four to six figures" for it. Internships.com raked in publicity.

And another way to keep that distribution humming along is writing the endorsed tweets for their clients.

"If you let the celebrity write the tweet, it would take a while," said Gullov-Singh. "They wouldn't get around to it."

So when Snoop muses via Twitter - "Wonder if this swagger wagon can fit 22's?" - his ghost writer is using language carefully crafted by Ad.ly and Toyota to promote the company's Sienna mini-van.

The company's executives said they plan to continue their "winning" strategy, snaring more celebrities and sponsors.