The Villages: Children not optional 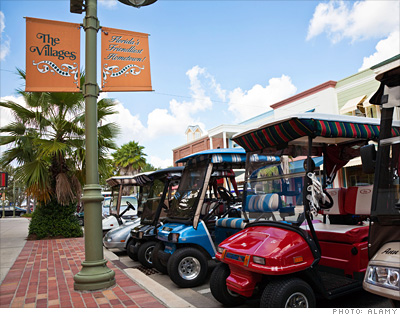 Think of the hit television sitcom, "Leave it to Beaver." Only there's no Beaver. And Ward Cleaver is at least 56 years old and cruises around in something that looks like a cross between a golf cart and a Bentley. At The Villages, there can be no permanent residents under 19 years old. At least one person must be over age 55 in every household. Children who visit can't stay longer than three weeks at a time.

Gary Morse, the developer, has truly designed a utopia of sorts for so-called active retirees: The type who no longer work but eager to go dancing, play a round of golf and squeeze in a game of mah-jongg before dining out with neighbors. Morse owns just about everything at The Villages, including the local radio station that pipes oldies music out of lamp posts and fake rocks at the two downtowns. The developer also owns a full-sized newspaper called The Villages Daily Sun.

At one and half times the size of Manhattan with about 80,000 residents, the community was designed so that golf carts trump automobiles as the preferred mode of transportation. At prices ranging under $150,000 to more than $1 million, all this has made the massive community the it place for leisurely retirement.