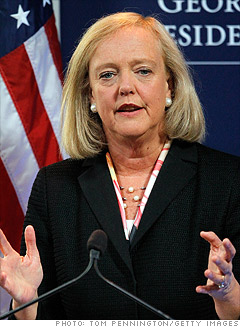 Shes back! In late September the losing California gubernatorial candidate -- and former No. 1 MPW -- was named CEO of HP, Americas largest tech company by revenue. While her ascent to the role is a sure sign of her power, it remains to be seen if she can fix the computer maker and bring order to its dysfunctional board.
Network with Hewlett-Packard
From the October 17, 2011 issue
50 Most Powerful Women