Best jobs if you're leaving the military 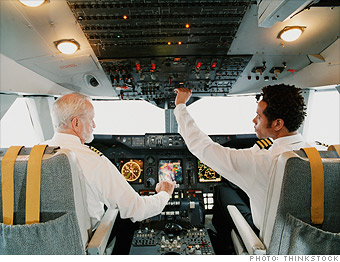 The job: Airline pilots typically don't make as much as military pilots starting out, but "multiple combat tours are not good on family," says Bob Worthington, president of the U.S. Airline Pilots Association. The family-friendly aspects of flying a corporate or commercial aircraft make the job particularly attractive for vets with young children. Also, as you rise in rank in the military, you often fly less, while as a civilian pilot your career will revolve around being in the air.

How to switch: You'll have to convert your military flight certification into an FAA one. The protocol varies depending on the type of planes you flew.

Subscribe to Money Magazine
Do Pilots have great jobs, or what?
From the November 2011 issue
Notes: All pay data from PayScale.com. Median pay is for an experienced worker (at least two to seven years in the field). Top pay represents the 90th percentile. Job growth is estimated for 2008-18. Total current employment level is estimated number of people working in each specific job.

Sources: PayScale.com, Bureau of Labor Statistics, and MONEY research
Video
How we picked the Best Jobs
Using Bureau of Labor Statistics forecasts for 7,000 titles, MONEY and compensation experts PayScale.com identified jobs requiring a bachelor's degree that have strong growth prospects, and eliminated any with fewer than 10,000 positions nationwide, plus those requiring advanced degrees that take more than three years. More