A small business owner gives in and files for Chapter 13 - and discovers it was the smartest decision he's ever made. 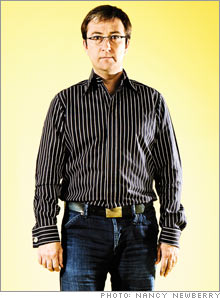 Get expert tips, links, tools and lists on...

(FSB Magazine) Dallas -- I had a bad feeling in the pit of my stomach when my lawyer asked me to come to his office with my wife, Tara. I had been struggling to pay $1.3 million in debt from a failed restaurant in Houston. I had hired the attorney after creditors started phoning our house and making violent-sounding threats - and sending their goons to my other cafés to collect. Tara was home all day with our 3-year-old triplets, and some of the collectors were so menacing that we were afraid to answer the door.

When I hired the lawyer, I'd told him that bankruptcy wasn't an option. He'd gone along with me. But when we arrived at his stately Dallas office, he told me - slapping a thick pile of unpaid bills from my creditors on his desk - that he had changed his mind. My bank and former suppliers wanted payment - immediately. I had already taken out a second mortgage on my house, and my new venture, Big Ink PR & Marketing (biginkpr.com), was pulling in only $1,000 a month. "You can give the money to your creditors," the lawyer said, "or you can buy groceries." He told us I should file for personal bankruptcy. Tara's eyes welled.

I had never imagined this moment when I left my job selling ads for a national fashion magazine to buy my first nightclub, Clearview, in Dallas. From the time I picked plums from my grandmother's trees and sold them to the neighbors, I have always been good at spotting opportunity. Clearview became so successful that I turned it into four clubs under one roof and later opened a second venue next door. I also opened a thriving restaurant called Liberty Noodle in Dallas. At its peak my company employed 200 people and generated $6 million annually.

Your thoughts on filing for bankruptcy protection?

Noodle in Houston. Only after we had signed the lease did we learn that the city was going to start construction on a light-rail track in front of the building. (We resolved a dispute related to this in mediation.) Locked into the deal, we tried to make a go of it. Then, on opening day, Tara went into labor with our triplets two months early. The babies were hospitalized for more than a month. The Houston manager put up a good fight, but we couldn't overcome our inaccessible front door. We shut down. I had already sold the nightclubs, our stocks, our motorcycles, and a boat to pay my team. Still, I couldn't keep up with my creditors.

I thought bankruptcy was a coward's way out, an escape hatch for crooks and cheaters. So I soldiered on, trying to pay the seven-figure debt. It wasn't until the day the lawyer confronted us that I realized I had put concern about my reputation above being a responsible husband and father. We applied for Chapter 13 protection in 2005, before Congress made it harder to file. Now my secret was public.

Filing was the smartest thing I ever did. A judge dismissed some bills and let me consolidate others into one monthly payment. I'm now paying off a five-figure debt that includes back taxes and attorney fees, using any profits I generate at my growing firm, Big Ink. Meanwhile, I have created jobs for a dozen employees. Since I opted for Chapter 13, I have shared my story with other business owners - and been surprised to learn how many have also filed, bounced back from crushing debt, and created successful new ventures. I only wish I had known sooner.

- As told to Elaine Pofeldt

First Published: September 18, 2007: 10:46 AM EDT
A startup's best friend: failure
Three roads to wealth
To write a note to the editor about this article, click here.