A new hook for Maine lobsters

As lobstermen struggle with rising costs and dwindling revenue, a pair of sibling seafood purveyors hope to turn the tide with a new program offering foodies a piece of the Maine waterway: their own personal lobster trap. 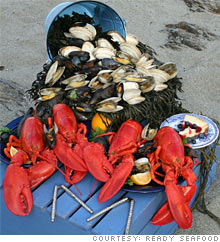 (Fortune Small Business) -- Add "lobsterman" to the long list of American jobs in trouble. Fuel and bait costs are soaring, the annual catch is dwindling, and market prices for lobster are flat. Last year's Maine lobster harvest looks to have been the smallest in five years. Faced with shaky fundamentals, a pair of Portland seafood purveyors are trying to counter the industry's decline with the most reliable tactic for escaping grim industry economics: savvy marketing.

Brothers John and Brendan Ready, co-owners of Ready Seafood, have a new offering tailor-made for foodies looking to get closer to their own personal supply chain. The pitch: Own your own lobster trap. For a $2,995 yearly membership fee, lobster lovers will be shipped every critter caught in their personal trap, with a guaranteed minimum of 40 lobsters. (If the trap is bountiful, the subscriber scores more crustaceans.) Each FedExed shipment of four or more lobsters comes with a pound each of steamer clams and mussels, lobster bibs, cooking instructions and a primer on Maine's sustainable lobstering practices

Ready acknowledges that dropping three grand on a few dozen lobsters is a luxury with a niche market, but he's optimistic that the program's fringe benefits will lure buyers. Each "Catch A Piece" customer is invited to develop a relationship with the lobsterman assigned to fish his or her trap. Customers can log in to online accounts to check their trap's weekly harvest. They'll also receive video updates from the working waterfront, as well as a personal phone call following each shipment.

Since launching the program in November, Ready Seafood has sold 200 traps, and aims to reach 400 by year's end.

"Our guys are no longer lobstermen - they're marketers of the product," Ready says.

That's a career shift Maine lobsterman Curt Brown is willing to make. His income has dropped 5% to 6% each year for the past few years. In 2007, the fall-off was steep: Brown made 10% less than he did the previous year.

"Lobstering was real good about six or seven years ago," says Brown, who is the Readys' cousin and began fishing alongside the brothers in grade school. "Right now it's not terrible yet, but it's getting to that point."

Not only have market prices for lobster remained stagnant - a lobsterman might fetch, on average, $4.50 per pound - but the costs of doing business have also doubled over the last few years, Brown says.

"We can't have another year like last year and not expect to see a pretty good shakeout," says Carl Wilson, the Department's lead lobster biologist.

Meanwhile, the working waterfront is shrinking, losing ground to developers as well as federal policies that aim to regulate fishing areas where populations have been decimated. Part of the solution for the lobster industry, Ready believes, is to find a way to charge more per pound at market. Hence the need for innovation.

For lobstermen - all independent harvesters free to sell to any distributor  the incentive to participate in "Catch" is clear, Ready says.

Ready Seafood is offering a $0.40-per-pound premium on all lobsters brought in by participating fishermen for the year. The markup applies not only to the haul from each lobsterman's "Catch" traps, but for his regular traps as well.

Brown says that $0.40 jump is substantial.

"It's an intense industry," he says. "Lobstermen see as little as a $0.10 difference in price from day-to-day and they'll jump dealers."

Since launching the "Catch" program in November, Ready says he's received calls from three or four lobstermen a week - and sometimes, from their wives - wondering how to get involved. Currently, he has eight fishermen enrolled in the program.

"These guys are desperate to find a way to make more money fishing," Ready says. "They all see the writing on the wall."

"It's a nice idea, but my lobsters are the same as their lobsters," McAleney says. "All it is, is you get the rights to sit around the table and say 'It's my trap. These are my lobsters.'"

Iron Chef Symon gets back to business

McAleney's plan to help drive up lobster demand - and eventually, prices - is to find new and broader markets for his product. Currently, he is trying to introduce lobsters to buyers in Brussels and to educate wholesalers and restaurants in Europe about how to handle the product.

"We're all trying our damnedest to get a better price for our lobsters," says McAleney. A handful of lobstermen who sell to him lost their boats last year due to missed loan payments, he notes.

Colin Woodard, a Maine historian and author of The Lobster Coast, says the industry will be watching closely to see whether the Readys' idea succeeds. He's dubious about how well it will scale.

Still, "Catch" is drawing notice from lobster lovers. Business partners, couples and families have chipped in to buy traps. Customers also include entrepreneurs like Bryson Voirin, who gift their lobster shipments to clients.

Voirin, whose Canopy Access Consultants creates custom outdoor expeditions for high-income clients in Europe and America, says "Catch" thank-you packs have been a hit with his customers - and a winning alternative to clichéd corporate gifts like chocolate.

"Our clients are far more interested in participating in something green or sustainable like Maine lobsters," Voirin says. "These days, everyone is conscious of where our seafood comes from." (Unlike most states, Maine prevents lobstermen from legally harvesting lobsters that are too small or too large, to help maintain breeding populations for the future.)

Voirin ran a cost-comparison before buying a trap: After factoring in delivery costs and extras like the clams and mussels, each "Catch" gift pack costs about $15 more than ordering through standard overnight lobster distributors, he says.

"That added cost is well worth it," Voirin says. "Sending sustainable lobster dinners from our own lobster trap in Maine separates us from standard tourism companies."

Plus, each Catch shipment includes a personalized note from the lobsterman - a nice touch Voirin and his clients appreciate.

The program is starting to draw national notice: In April, the Small Business Administration awarded the Ready Brothers the National Young Entrepreneurs Award for their innovative business approach.

"They're really re-engaging the lobstermen, and it's apparently making some waves in the industry," says SBA spokesman David Perry.

Would you drop three grand for your own lobster trap? Join the discussion.

Sharing a Lobster: An online seafood merchant boosts sales by giving other Web sites a piece of its action.

Where are they now?: Fortune Small Business checked in with past winners of the Small Business Administration's National Small Business Person of the Year award to find out how they and their companies are doing today.
To write a note to the editor about this article, click here.