A diet food vendor scores by blowing up its business model

The richest executives
These FSB 100 insiders each own $15 million or more in stock and options.
View photos
Supersizing Nathan's hot dogs 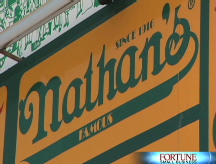 (Fortune Small Business) -- Like a dieter stuck at a demoralizing plateau, Medifast (MED) (No. 47 on this year's FSB 100 list) could have given up.

During the 1980s the Owings Mills, Md., company sold weight-loss products and nutrition bars through a network of health-care professionals who prescribed them to the clinically obese. But in the mid-1990s health insurers stopped covering many diet-food products, including Medifast's. Revenues sank from $14.4 million in 1997 to $6 million the next year. CEO Brad MacDonald cut his staff from 200 to 11, and sales stagnated for the next five years as he fended off bankruptcy.

MacDonald knew Medifast had to rethink its business model. He decided that shaping up the firm would require a different distribution method: selling directly to consumers, not physicians. Medifast took the leap, investing in a call center to handle customer service and adding new e-commerce functionality to its Web site. As a result, after falling to a low of $3.9 million in 2000, sales climbed to $5 million in 2001.

Around that time, Medifast caught the eye of Mike McDevitt, a young private equity analyst at the Blackstone Group in New York City. Despite Medifast's so-so revenues, McDevitt, 30, sensed growth potential. He contacted MacDonald, interviewed for a position as controller, and landed the job.

McDevitt liked MacDonald's direct-sales strategy. But he knew that Medifast had to beef up its marketing to make the new model work. So he poured funds into online and print direct-response ads. The firm also started "Take Shape for Life," an Avon (AVP, Fortune 500)-style multilevel marketing program that allows customers to earn commissions as vendors. Take Shape for Life brought in revenues of $15 million in 2003, its first year. By 2007, the firm's overall sales had shot up to $84 million.

Medifast soon faced a slew of new challenges. The $40 billion weight-loss industry has always been glutted with small players, most of which wind up getting crushed by heavyweights such as Jenny Craig and Nestlé's. But the competition has grown more intense in recent years. Medifast's rivals, including LA Weight Loss and NutriSystem (NTRI), have bulked up their marketing spending as national obesity rates - which are still high - leveled off.

Will employers solve the obesity epidemic?

In early 2007, Barron's magazine reported that MacDonald had adopted a pseudonym to tout his firm on Yahoo (YHOO, Fortune 500) Finance message boards - and that he had instantly handed the CEO title to McDevitt when caught. Medifast responded that the succession plan for MacDonald had been laid out in the previous year's 10-Q. Barron's also asserted that an efficacy study on Medifast products, which the firm touted in its ads, had been rejected by the peer-reviewed medical journal Diabetes Care. Dr. Lawrence Cheskin, the author of the study, acknowledges that Diabetes Care declined to publish his work but points out that the study was later published by The Diabetes Educator, which is also peer-reviewed.

Between the competition and the bad press, Medifast took a financial hit. Profits dipped slightly last year, despite a 13% revenue jump. The firm faced delisting by the New York Stock Exchange in December 2007, when its market capitalization fell to a low of $40 million. Medifast's market cap is now at $80 million, which satisfies the exchange's listing requirement of $75 million.

McDevitt, who became president in 2005 and CEO in 2007, blames Medifast's woes on heavy investments in infrastructure and marketing. Medifast launched a network of franchised weight-control centers last December and plans to open 25 locations by 2009. McDevitt also upped ad spending, from $14 million in 2006 to $20 million the next year.

The company's expansion marks another necessary evolution, says Scott Van Winkle, a research analyst with Canaccord Adams in Boston (neither Van Winkle nor his firm invest in or advise Medifast).

"The multichannel approach is the best way for them to grow and differentiate themselves," he says.

After sinking last year, Medifast's stock has risen slowly since March. First-quarter revenues are up 25% over the same period last year, putting the firm on track for annual 2008 sales of more than $100 million. Van Winkle predicts that Medifast's profits will climb within three years.

That wouldn't be surprising for a firm with Medifast's rebounding skills.

Would you eat 2,900-calorie cheese fries?
To write a note to the editor about this article, click here.