Evacuated residents return and businesses get back to work in Gustav's wake - even as a new storm, Ike, once again threatens Gulf oil production.

They survived Hurricane Katrina, but can these entrepreneurs withstand a fresh whirlwind of bureaucracy?More
Oil churns ahead of Ike 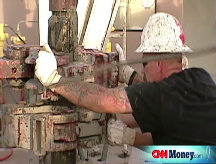 NEW ORLEANS (CNNMoney.com) -- Grocer Marc Robért II went through hell after Hurricane Katrina struck New Orleans in 2005. In the last three years, he has managed massive renovations on several of his supermarkets heavily damaged by the Katrina flood, and he fought for and won a $20 million settlement from the insurer that had refused to pay his claims.

Hurricane Gustav did only light physical damage to New Orleans, but it knocked out electrical power - a crisis situation for a grocer.

Robért said on Friday that his Katrina experience left him in good stead.

"When we renovated after Katrina, we put in a 450-kilowatt generator that had the capability of running the entire store," he said, referring to his Lakeview-area supermarket that was all but destroyed by Katrina. "When power went out last Monday, the auto transfer switch kicked in and the generator ran the store until the city's power came back on Wednesday afternoon."

The generator kept the air conditioning, freezers, coolers, lights "and everything you could imagine" operating during and after the storm, Robért said.

"Our biggest supplier, Associated Grocers, is in Baton Rouge and was also running on emergency power," Robért said.

Both companies also faced labor shortages, as employees scattered to seek shelter from the storm. But by the end of the week, employees were returning, and Robért said deliveries of bread, milk, meat and soft drinks had resumed.

"Our shelves are going to be looking a little ravaged for a while, but we're getting back in shape," he said.

The availability of groceries is crucial to the speedy repopulation of a city after an emergency evacuation, as New Orleans discovered a few years ago. Knowing that stores like Robért Fresh Market are open helped encourage residents to return quickly after Hurricane Gustav moved on last week.

Some local retailers, professional service firms and other businesses never lost power during the storm and continued operating much as usual. Others that did shut down were gradually coming back on line by the end of the week and were expected to be fully open for business by Monday.

Helping speed the recovery: Many local companies learned from Katrina that knowing how to contact employees during an emergency is vital. Armed with communications plans, companies were able to quickly locate and reassemble work teams that scattered in the evacuation.

Adler's Jewelry has about 100 employees in five locations. As part of its emergency planning, the company had each employee fill out a form listing personal cell phone numbers and alternate contact information. Adler's also set up a message board on its Web site, and instructed employees on how to contact the company in the event of store closures.

"Everybody seemed to check in, and we aren't missing anybody," co-owner Tiffany Adler said. The company lost a several days of business from the storm and the evacuation of New Orleans, but all five stores will be open Monday morning, she said.

Because preparing for and dealing with a natural disaster can be expensive, hurricane threats add a layer of risk to owning a business in New Orleans. But many local businesses are so deeply identified with the city that owners say they have little interest in moving. Adler's Jewelry, for instance, has operated in downtown New Orleans for more than a century.

Though his grocery business is less than 20 years old, Marc Robért feels similarly attached to the city.

"We're part of this community, we know many of our customers by name," he said. "I think a kind of civic responsibility goes along with this. If you stand for your customers during the tough times, they stand with you the rest of the time."

Lawyer John Pearce, a partner with the Montgomery Barnett law firm, echoes the thought. "We very much believe in New Orleans and its future," he said.

The firm, which has about 50 employees in its home office here, "virtualized" its records system after Katrina so that all client files and other data are readily available from branch offices in Baton Rouge and Gulfport, Miss.

"If Gustav had done more damage to New Orleans or if circumstances were to keep us away longer, we could have operated out of one of the other offices," Pearce said.

As it was, the firm simply extended the Labor Day weekend by one day and reopened with many of its employees back on Wednesday.

Pearce feels fortunate that his company did not have to take the extraordinary measures this time that it did after Katrina. But the firm is keeping its disaster preparedness insurance policy in place - a wise move, with yet another storm on the horizon.

Crude oil and natural gas production in the Gulf of Mexico remains in limbo, as producers study Hurricane Ike's projected path. New Orleans residents are once again watching and waiting, hoping another evacuation won't be necessary.

First Published: September 8, 2008: 12:35 PM EDT
Have you been affected by the hurricanes? Join the discussion.

Inventor's device helps save his own flooded neighborhood
To write a note to the editor about this article, click here.