Building a berry business in the Amazon - and Utah

EarthFruits is encouraging entrepreneurship in Brazil as it brings exotic fruits to the U.S. 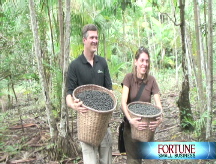 How not to sell abroad
Choice Translating aims to prevent marketing mistranslations, such as these widely reported gaffes.
View photos

BELEM, BRAZIL (Fortune Small Business) -- Kevin Busby kicks off mud-caked Nikes (NKE, Fortune 500) and wraps his naked feet in rags. Grabbing an açaí tree, the 55-year-old business owner from Utah tries to shimmy up its smooth trunk. Seconds later he slides back down. Busby's business partner, Fernanda Stefani, 40, helps him try again by supporting his feet - but once out of her reach, Busby slips back to the rain forest floor.

"I don't quite have the technique yet," he says.

On a nearby tree, a 12-year-old Brazilian boy moves swiftly to the top branches in a caterpillar motion and grabs two bundles of its blueberry-like fruit without breaking a sweat. He slides down and hands the fruit to his mother, who shucks them into a large basket with purple-stained hands.

Açaí berries have been collected like this in the Amazon for hundreds of years - and luckily for Busby and Stefani, they're not here to compete with the locals. The pair built a thriving company, EarthFruits, that started shipping açaí for use in juices and powders just before the berry and its health benefits became widely known in the U.S.

Such sudden growth can hamstring a company, but EarthFruits keeps up with demand. Its secret? Helping the locals grow their own açaí economy.

Stefani previously handled açaí at a general trading company in Săo Paulo, and there she became familiar with several local fruit-processing plants that were poorly managed but had the potential to grow. In 2006 she set out on her own and turned to U.S. investors for financial help, but still had trouble working around the Brazilian government's red tape. Busby, a Raytheon (RTN, Fortune 500) supply manager who saw promise in the exotic-fruit business, teamed with her to conquer the açaí market.

Açaí is the size and color of a blueberry with a seed the diameter of a pea. One berry holds only a thin layer of pulp. EarthFruits bought 4,000 tons of the stuff this past season from the river people.

"Fortunately the fruit grows like a weed," says Busby. In 2000 one basket of Açaí cost about 90 cents. Today it can reach $10. And yet 90% of the berries still go unharvested.

Açaí was not well known in the U.S. until 2006, when health journals (and Oprah Winfrey) started plugging its beneficial vitamins, antioxidants, and fatty acids. EarthFruits landed in the right place at the right time.

"It's amazing that we were able to keep up with the demand," Busby says. "But the fact that we did really helped us establish ourselves in the health-foods market."

Stefani runs the company's Brazil operation, based in Belém. She and Busby incorporated Earth-Fruits in South Jordan, Utah. Within a year they had eight employees and $6 million in annual revenues. They are on track to hit $10 million by the end of 2008.

Busby leaves most of the fruit-gathering and processing operations to Stefani while he concentrates on managing orders and sales in Utah for his international client base. However, he realizes the benefit of meeting Stefani and the locals face to face, and takes four trips a year to Brazil.

On this latest visit, the day begins at 5 A.M., when Belém is still dark and quiet. Stefani swerves her car to avoid stray dogs. Lone cargo trucks honk past the homeless adults and children sleeping on the sidewalks.

As the horizon brightens, she and Busby drive onto the Guamá car ferry. The Guamá River opens in front of them as the forests on either side of the murky water burst with all hues of green. It is already 80 degrees, and the thick air carries the sounds of thousands of squawking birds. A slight breeze carries a smoky odor from forest fires dying out miles away.

Belém's state, Pará, is the second-most-blighted area of the Amazon. Nearly 20% of the forest here has been destroyed. Deforestation rates have fluctuated in the past decade, depending on the price of soybeans and cattle - the primary reasons why farmer s here burn trees. EarthFruits hopes to help the river communities preserve their natural habitat by encouraging industries that depend on the trees.

At a small river village called Mutirăo, Stefani and Busby walk around on elevated planks that bend under their weight as roosters and pigs amble underneath. Look for mile-high trees and human-sized leaves here and you'll be sadly disappointed.

"That all vanished years ago," says Stefani. "The government claims to protect the area but can be easily bribed. Untouched forests are so rare these days, we'd have to travel 250 miles to see one."

This community's forest has started to grow back, but Stefani believes that the vegetation will never be what it was. Busby passes the communal out-house and enters the schoolroom, which is filled with posters of fruit.

"These people have been taking fruit from the forest their whole lives," he says. "Much of the time, they're the ones teaching us."