A bereaved cruise line owner enlists his customers in a novel fundraising plan.

Paste this link into your favorite RSS desktop reader
See all CNNMoney.com RSS FEEDS (close)
By Larry Pimentel, as told to Marcy Macdonald
February 18, 2009: 10:43 AM ET
Gates: Why we give 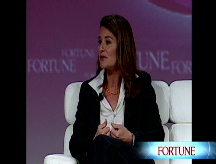 (Fortune Small Business) -- I had just launched my dream business: With a fellow entrepreneur I'd founded the SeaDream Yacht Club, a small private cruise line with twin mega-yachts. The company was an immediate success. But it was a terrible time, really. I'd left my job after 10 years as president of Cunard Line and moved from California to Florida to start our new business. Quite suddenly, in August 2000, my beloved wife of 21 years died of a rare lung disease.

I had an 11-year-old daughter and a 13-year-old son. We were so new to town that there was no infrastructure or family support for us - not even anyone to talk to. Facing a loss like that can either break you or define you. You have to deal with things that your kids don't understand. You have to watch them suffer. Mine bombarded me with heart-wrenching questions such as, "Doesn't God love our mom?"

To help us deal with our grief, I adopted a cause: the Children's Bereavement Center of Miami, a nonprofit organization that provides services for kids who have lost a parent, sibling or grandparent with whom they lived. Founded by two psychologists, the CBC offers children in South Florida a safe and loving place to vent frustrations and reach out to peers. Getting together once a week, group members realize they aren't the only ones who have survived tragedies. And although the sessions aren't therapy per se, they are therapeutic.

The CBC is free and supported solely by contributions. No child is turned away. I am now on the board of the center and help it as much as I can.

My SeaDream Yacht Club co-founder, Atle Brynestad, also has children who lost a parent. So a few years after we launched our business, when it came time for the first CBC fund-raiser, it was natural to hold it aboard one of our yachts, the SeaDream II, before an Atlantic crossing.

The guests at the charity event saw a short film of the kids talking about the program and their lives. Crew members were so touched that they decided to become ambassadors for the cause. James Cabello, the ship's activities director, invented a "deck walking donation" system. Steps for Charity was born at that moment.

Guests on both vessels pledged to donate dollars for miles walked on the open Deck Six. Sixteen laps around Deck Six is equal to one mile. They covered as much as 26 miles, which is 416 deck laps.

People loved the idea - suddenly everybody was walking and donating. Then the crew decided to match the funds that came from the guests, and our company matched that figure - our first gift to the CBC was $10,000. I'm very proud of our crew and international personnel: In a little way, they're making a big difference.

Newman's Own after Paul
To write a note to the editor about this article, click here.