How to sell your business - even now

It may be a tough time to sell, but you can find creative ways to cash out. 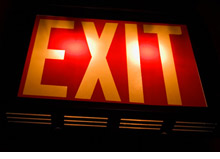 SOS: Send loans now
With bank lending to small businesses nearly frozen, these 8 entrepreneurs are among the thousands fighting for the credit lines and loans they need to keep their companies alive.
View photos
Get expert tips, links, tools and lists on...

(Fortune Small Business) -- Rick Hunt was working hard to sell his environmental services company, Risk Removal. The business, based in Fort Collins, Colo., removes asbestos and lead paint for commercial, residential and government clients. Since acquiring it with three partners in 2002, Hunt had seen the business double in size; by the end of 2008, Risk Removal was generating annual revenues of $3 million. The business attracted a lot of attention from potential buyers, but tightening credit markets were making it difficult to close a deal.

Hunt, 48, says he and his partners wanted to "avoid the pain and suffering that would come from a broken deal," so they hired a broker to find them a buyer who could get a lender to say yes.

The dreams of 12 million ready-to-retire baby boomer business owners are stuck in mid-recession reality: They'd like to cash in but hold trillions of dollars in companies they may not be able to sell for some time.

"These would-be retirees may have only one more window of opportunity to exit their businesses before they are in their seventies," says John Leonetti, author of Exiting Your Business, Protecting Your Wealth.

Despite the inevitable delays, some professional brokers say there's still a market for firms valued at less than $10 million. "That's because the financing they are seeking, through local and regional banks, has not dried up to the same extent as financing for much larger deals," says John Brown, author of How to Run Your Business So You Can Leave It in Style and president of Business Enterprise Institute.

Of course, if you want to sell your company right now, expect it to fetch a lower price.

"Investment bankers say that valuations have dipped from a year ago by multiples of one-half to one point," Brown says. "So if businesses were selling for six times EBITDA [earnings before interest, taxes, depreciation and amortization], today it's five or 5˝ times."

But even buyers who can obtain financing aren't jumping at these bargains. As an example, Brown notes that in good times the purchase price of a business may be adjusted downward if a seller's customer base lacks diversification. "Today buyers will just walk away," he says.

Sellers should be prepared to make concessions. "If they have to sell now, they'll have to act as the bank and finance a portion of the deal," says Cress Diglio, president of Corporate Investment International, a business broker in Orlando.

Hunt and his partners found a business broker, Bob Balaban of IBG Business Services in Denver, who got them eight offers. "We put the ability to close a deal on an equal footing with - if not ahead of - the dollar amount," Hunt says.

The partners chose a mid-range offer from a buyer who understood the business and could put down 25% of the purchase price in cash. The bank financed 50%, and Hunt and his partners took the remaining 25% in a five-year promissory note that pays 7% interest.

"Sure, we would have loved to get more venture-capital-level returns," Hunt says, "but the purpose was to get the deal done."

Sales of small businesses on the rise

Where to find a biz to buy

Mistakes to avoid in selling your business