When delegating, avoid staffers with blowtorches

Running a business is all fun and games -- until somebody loses a windshield. 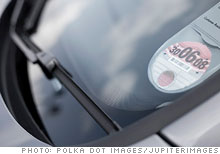 From sloppy accounting to poor hiring, here are the business-killing traps that every entrepreneur must avoid.
View photos
Get expert tips, links, tools and lists on...

(Fortune Small Business) -- If you want to grow your business, you can't do everything yourself. That's obvious, right?

But entrepreneurs tend to be hands-on managers, and I'm no exception. Early in my career I was already running a successful picture framing business with 30 employees. Yet I was still handling a number of simple tasks that could easily be delegated. Or so I thought.

In those days the city of Chicago required local car owners to renew their vehicle registration every January. Doing the job right meant scraping the old sticker off the windshield with a razor blade and attaching the new one. Some folks would stack the new stickers above the old ones, like merit badges on a Boy Scout uniform. That wasn't my style. I owned a personal car and a company van, and I not only insisted on replacing the stickers properly, but I also performed the ceremonial sticker-changing myself. That year, however, I decided that someone else could handle the job.

So I delegated. It felt good -- until I climbed into my car that evening after a busy day at the office. The new sticker sat closer to the center of the windshield than to the bottom corner on the passenger's side, where it was supposed to be. Chicago has always used great stickers. Once stuck, they stay stuck.

I had learned the first rule of delegating: Always give thorough instructions. I pondered that lesson for the next 12 months.

Determined to do things right this time, I picked a different employee and gave him detailed marching orders: Use a razor blade to scrape off the old sticker. Before scraping, put a paper towel on the dash to catch the shavings. Place the new sticker two inches from the bottom of the windshield and two inches from the passenger's side of the frame.

I felt good. At last I had learned to delegate.

Forty-five minutes later the guy came back looking a little sheepish. "Did you get the stickers on?" I asked. He nodded, but I could tell there was a "but" coming. I was right.

"The stickers are on, but I can't find the razor blade," he said. "I've been looking for half an hour."

"You mean it might be in the car somewhere?" I asked incredulously. He shrugged. "I don't know. I can't find it."

I had just learned the second rule of delegating: Spell out everything. Every time I got in that car, for as long as I owned it, I would worry that my butt (or a passenger's) would be slashed by a razor blade.

When January rolled around I was briefly tempted to change the stickers myself. But I was a manager, dammit. Plus it was 10 below zero outside, not including windchill. So I picked a new guy and gave him even more detailed instructions. I reminded him not to lose the razor blade. I also told him to come back to me when he had successfully placed the first sticker.

Ten minutes later he handed me the old vehicle sticker -- in one piece! This was unheard of: I had inspired my employee to bust out an Olympic-level performance. I was obviously some kind of übermanager. I gave him the next sticker; I was halfway to victory! After 30 minutes I went looking for my prize employee and found him staggering out of the men's room. He looked as if he'd just been waterboarded.

"Did you put the second sticker on?" I asked.

"No," he replied wanly. "I used a blowtorch to get the old sticker off, but this time the windshield exploded."

Now I understood how he'd managed to get the first sticker off in one piece. I also realized that my employee had suffered the real damage. Although physically unhurt, he had just blown up the boss's windshield and was literally sick to his stomach. I was enough of a manager at that point to understand his devastation and let him off the hook.

Year Four to the Present

I once again put the stickers on myself. (A while back the city helped me out by moving the annual expiration date to July, so I no longer need to scrape my windshields in the freezing cold.) But I haven't stopped delegating altogether. No doubt, disasters can happen when you delegate. But experience has taught me that enduring the occasional screwup still beats trying to do everything yourself.

Here's the twist: While I now hand off many tasks for the good of the company, I've learned that delegating can sometimes be more trouble than it's worth. I like changing my own vehicle stickers. I'm good at it!

And now when I see an employee carrying a blowtorch in the parking lot, I always ask where he's going.

Jay Goltz employs 110 people at Artists Frame Service, Chicago Art Source and Jayson Home & Garden, all based in Chicago. He is the author of The Street-Smart Entrepreneur (Addicus Books).

Stress test: Should your biz fold?

10 questions to ask if your biz is in trouble