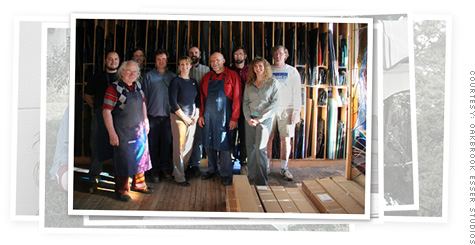 NEW YORK (CNNMoney.com) -- Most of the health care reforms President Obama signed into law last month won't kick in for another four years. But small businesses can look forward to some quick relief: a tax credit to offset insurance premiums took effect immediately.

Millions of business owners will get postcards from the Internal Revenue Service in the coming weeks suggesting they check and see if they are eligible for the 2010 tax credit. Notifications are also going out to tens of thousands of tax professionals.

To get the credit, a business must have fewer than 25 full-time workers or the equivalent (the hours worked by part-timers count), pay an average annual wage of less than $50,000, and cover at least half the cost of health insurance premiums for their workers.

There are a few additional restrictions, including caps on how high qualifying premiums can be, and the credit works on a sliding scale. Businesses with fewer than 10 employees and average wages less than $25,000 can max it out, while larger firms and those with higher payrolls collect a reduced credit.

For nonprofit employers, the credit is refundable, meaning they can collect it and get a check back from the government even if the business runs at a loss and has no taxable income. For-profit companies can only use the credit to offset the actual federal income taxes they pay for the year. However, any unused portion of the credit can be carried forward for up to 20 years to reduce future taxes.

Cash back this year: The IRS broke down the numbers for a few hypothetical businesses to help owners understand the kind of cash they can get back.

For real business owners, the math isn't so clear-cut. Tim Gordon, owner of J&M Sanitation in Kuna, Idaho, hasn't yet calculated the tax break his six-employee business will get, but any help at all is welcome: "This is a step in the right direction," he said.

Gordon pays 100% of the premiums for health insurance for his employees and their family members. He views it as a moral responsibility: "I know that my company cannot operate without employees," he said. "I am trying to show them how I value them, and I think the employee then is more dedicated to the business and my customers."

But it's a pricey investment -- and one his competitors rarely make. The tax credit "might give me some cost competitiveness versus those who don't provide health care or have the employee pay a portion of it," Gordon said.

For Paul Phelps, owner of stained glass maker Oakbrook Esser Studios in Oconomowoc, Wisc., the tax credit will help him keep up with the soaring cost of insuring his staff of 10. Phelps, too, pays 100% of the premium cost for his workers and their families: "In a smaller company, you are close-knit," he said. "It is something that I am really proud to be able to do. It just would be sad to not be able to do it."

But this year, the company's premiums shot up 30%. "The increases have been devastating," said executive administrator Dondi Griffin. "We have had to reduce our benefits in order to continue health benefits." The company's policy, which once had no deductible, now carries one for $1,500 per person.

The cost of expanding coverage: One goal of the tax credits is to incentivize more companies to offer health insurance for their workers. Big Air Heating and Air Conditioning, in Concord, Calif., is one of many firms now running the numbers to see if it makes sense to expand coverage to qualify for the tax break.

"I don't know what is the future for us in terms of taxes, health benefits. I wish there would be more clarity for businesses," said Jennifer Santa Maria, the contracting company's chief financial officer. "I don't even get the answers from my tax guy, because he doesn't know either. It is really frustrating."

Big Air has nine employees, six full-timers and the rest working part time. Several employees get insurance through their spouse's plan and others have military veteran benefits, but Big Air paid for insurance for two employees in 2009 and will cover three in 2010, plus Jennifer, her husband and their two kids. The company kicks in $100 each month toward employees' premiums or 50% of the cost -- whichever is less. Mostly that's the $100 option.

But with the new tax credit, Santa Maria will need to run a whole slew of new calculations. It could pay off for Big Air to increase its contributions.

"If we contributed $150 to make a 50% contribution and we benefited somehow at the end of the year from these tax credits, then, yeah, we might consider doing that," she said.

The White House Council of Economic Advisors estimates that 4 million small businesses would qualify for the credit if they insure their workers, and that eligible companies will save $40 billion over the next decade from the tax break.

In a rough economy, every dollar saved is vital. "It might not match what [health care costs] increase in a year --- but wow, that is sure helpful," Phelps of Oakbrook Esser Studios said of the tax break. "It helps take that total burden off the company."