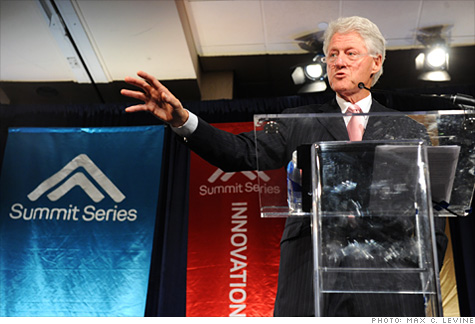 WASHINGTON, D.C. (CNNMoney.com) -- Former President Bill Clinton exhorted 650 of the country's youngest entrepreneurs to look beyond their own business ambitions and use their positions to benefit the less fortunate worldwide.

"The mission of humanity and the mission of America in the 21st century is to build up the positive and reduce the negative forces of our interdependence," Clinton said Friday night.

Clinton spoke at the Summit Series, a three-day conference of networking, discussions and activities for young entrepreneurs. The twentysomething, early thirtysomething crowd of CEOs, founders and investors come from a range of backgrounds.

Half the world lives on less than $2 per day, Clinton noted. "I really believe that the definition of citizenship is being fundamentally altered by the level of interdependence that we have."

In the age of record budget deficits, government agencies don't have enough resources to help the underserved, Clinton said. He pointed to the gap between what the government and the global network of nonprofits can afford to do and what is demanded of them.

"In the best of all worlds you will have a continuous interface with what is done by the government, the private sector and the NGOs [non-governmental organizations]," he said. But "we will always need citizen action," and that is where entrepreneurs can really take hold. "Businesses can find a way to make money with a humanitarian rule."

One attendee, Melissa Kushner, the 29-year-old founder of Goods for Goods, took heed. Her New York nonprofit company funnels surplus materials - like fabric and office supplies - to South African nations, primarily Malawi. She has three employees in the United States and two abroad.

"I thought it was absolutely amazing how smoothly he integrated so many of the issues we are facing all over our globe," Kushner said.

Katie Johnston, another attendee, works for an Ernst & Young unit that focuses on high-growth, entrepreneurial companies. "This is such a highly motivated audience," she said. All the attendees have "some sort of social service: the line between business and social causes is blurring, at least for this generation."

The Summit Series is decidedly hip. There are no suits for these CEOs. Jeans and sneakers mix with flip flops and an occasional blazer. The evenings offer clubs, DJs and late-night snacks. There is no time for keeping track of business cards:

The Summit Series entrepreneurs use "MingleSticks" to keep up with who's who. When an attendee meets a new friend or business partner, they point their "MingleSticks" at each other and wait for a green light to tell them contact information has been passed.

Despite the fun atmosphere, the task list is ambitious.

Clinton spoke of his current concerns about rebuilding Haiti and revamping the U.S. health care system and reining in higher education costs. He also talked about efforts to provide health care to impoverished countries and the need for funding to get medicine to those nations.

One attendee was glad to hear the former president hitting the global issues hard. "It was really interesting to see a man of President Clinton's intellect -- when he is out of office -- being able to speak so candidly," said Jake Strom, who runs marketing and strategy for TOMS Shoes.

Bribe your workers to be health