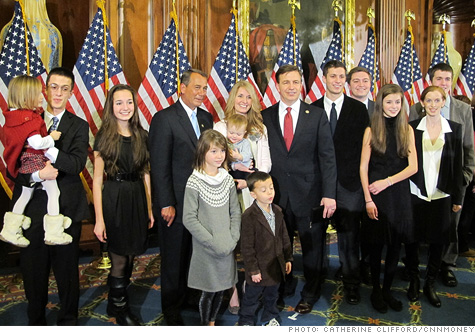 A big crowd of supporters, including his wife, Christie, kids, and the new Speaker of the House, Rep. John Boehner, came out to celebrate the ceremonial swearing in of Bobby Schilling (wearing a red tie) to Congress. By Catherine Clifford, staff reporterJanuary 5, 2011: 10:51 PM ET

WASHINGTON (CNNMoney) -- At the open house gathering to celebrate the official swearing in to Congress of Rep. Bobby Schilling in Washington, D.C., the pizza and ice cream were shipped in from Illinois.

The pizzas came in overnight from Saint Giuseppe's Heavenly Pizza, the shop that Bobby Schilling has owned for 14 years in Moline, Ill. Before deciding to run for Congress, Schilling was a pizza man. And lucky for supporters, there are pizza ovens in the historic D.C. office building, so the pizza was hot.

The ice cream, meanwhile, was shipped on dry ice from a local ice cream legend in Illinois, Whitey's. The owners of Whitey's Ice Cream weren't able to attend the party in D.C., but they wanted to show their support for Schilling on his big day.

For all of Congress, Wednesday was a big day. The 112th Congress was officially sworn in, giving Republicans a majority in the House, while Democrats maintained a slim majority in the Senate. Veteran Rep. John Boehner of Ohio took over the chamber from former House Speaker Nancy Pelosi.

But it was an especially big day for the Congressional first timers: Ninety-four new House members took office.

"It has been really, really busy," said Schilling, standing in the hall of the House, waiting to cast a rules vote about 4 p.m. But "I come from the restaurant business; you're talking to a guy used to working 12, 14 hours a day." When there isn't time for a meal, the pizza man resorts to energy bars: it "keeps you so you are not going to pass out," he said.

In addition to the official swearing-in ceremony, a family photo with fellow Republican Boehner to commemorate the day, and his first votes as a member of Congress, Schilling was meeting constituents and new colleagues, and being interviewed by reporters. And if there weren't enough cameras swarming Schilling, there were plenty of kids underfoot: He has ten. And his chief of staff has four, with a fifth on the way. There were kids all over the office, ranging from toddler age on up.

Schilling's son Levi, 18, said coming to D.C. for his father's swearing-in had been a "whirlwind." He flew in on Monday afternoon and the "first thing we did was come to check out my dad's office, that was pretty cool," he said. Since then, the family has been exploring the city from Chinatown to the central train hub, Union Station. The whole experience has been a little strange, though: "I have always known my dad as a pizza guy," said Levi.

With limited seating available in the chamber for the official swearing-in, supporters, friends and family watched two TV screens in Schilling's still-being-set-up office.

Friends and supporters Tim and Gin Wray drove 14 hours from Illinois with their 13-year-old daughter, Sierra, to be there for Schilling's big day. Gin went to high school with Schilling in Rock Island, Ill., and has been helping Schilling's campaign. She has a full time job as a landscaping manager, but helped out with everything from fundraising to watching kids if necessary.

"He is a family man, a business man," said Gin. "To help him get elected and to help him stay elected, I will do whatever he needs me to do."

At the open house, Dan Caulkins, the owner of several nursing homes in central Illinois, observed: "This room is really populated with small business owners."

For many newly elected members of Congress, having no experience in Washington was their ticket in.

"He is a fresh face. We share common ideology about the Constitution and limited government," said Caulkins, adding that Schilling is "very honest, open, and he is not a politician and not a lawyer."