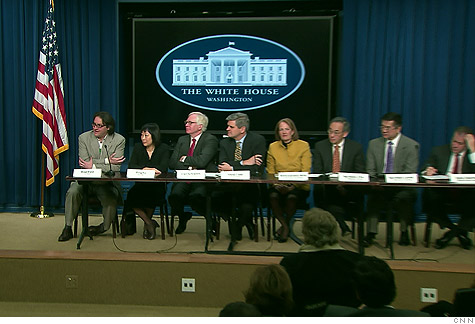 NEW YORK (CNNMoney) -- A campaign to promote new businesses and create jobs, bringing together government agencies and businesses such as Intel and IBM, was launched Monday by the Obama administration.

The Startup America Partnership aims to support overall entrepreneurship -- with a focus on high-growth, job-creating industries such as clean energy, medicine, advanced manufacturing and information technology.

Also participating are Hewlett-Packard (HPQ, Fortune 500), which is investing $4 million, and Facebook, which launched a series of mentoring events across the country.

On the government side, the administration offered a handful of policy suggestions and new investments.

The White House said the administration's new fiscal 2012 budget will propose permanently eliminating capital gains taxes on investments in qualifying small businesses. The tax elimination was introduced as a temporary provision in September, but this new proposal would make the tax break permanent.

The Startup America Partnership will be chaired by Steve Case, the co-founder of America Online who now heads an organization that invests in innovative people and ideas.

What does it do for me and my idea? With so many organizations, agencies and companies involved, the partnership's benefits come in a handful of different shapes and sizes.

Here are some examples of how the partnership intends to make capital more accessible and put entrepreneurs in touch with a support system.

-- The Small Business Administration will commit $2 billion as a match to private sector investment over the next 5 years through the existing Small Business Investment Companies (SBIC) program. SBICs are licensed, privately owned-and-managed investment firms that have helped companies such as Intel and FedEx (FDX, Fortune 500) get off the ground.

-- Facebook, which was a start-up itself only a few years ago, has pledged to launch Startup Days, a series of 12 to 15 events across the country. The events will offer training in new technologies, guest speakers from Facebook, and networking opportunities, among other resources.

-- The Department of Veterans Affairs will start two new programs to help vets launch high-growth businesses: an interactive website walking entrepreneurs through the various resources available to them, and a business incubator in Waukesha, Wis.

Can Obama help start up America?

-- The U.S. Patent and Trademark Office is offering an alternative for "prioritization examination," giving entrepreneurs with an idea for an invention a plan for a fast-track approval process.

-- Fashion designer Marc Ecko is launching a program at the University of the Arts in Philadelphia aimed at training would-be entrepreneurs in marketing, design and social media skills. Over the next five years, the program will invest in 750 startups.