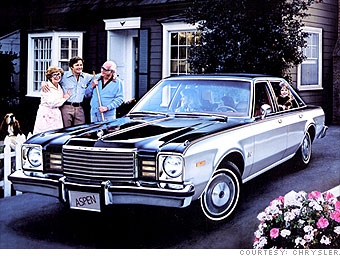 Sloppy quality, primitive emission controls, and feeble engines afflicted many 70's cars, but these two were among the worst. The entire 1976 and 1977 model runs were recalled to replace rusting fenders.

Losses piled up at the beginning of the decade and again at the end, making Chrysler the recipient of a government bailout.

RSS
More from Fortune
Can Chrysler survive?
The frailest of Detroit's automakers has been in private hands for a year. CEO Bob Nardelli badly needs a hit if the company is to endure. More