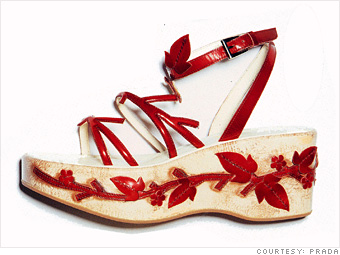 Prada launched its first women's footwear collection in 1979, but its renowned handbags eclipsed its shoes until the 1990s. Fashion followers caught an initial glimpse of Prada's high wedge sandal on the catwalk in October 1996, bringing them back into style several months later after a two-decade hiatus.

Prada goes shopping - for money
After a disastrous acquisition spree, the Milanese fashion house, looking to reduce its debt, has decided to raise cash by going public. But at what price? (more)

World's most expensive streets
Every city has one - a retail thoroughfare that houses the most exclusive stores. Real estate slowdown or not, these luxury corridors are still thriving - for now, at least. (more)

How J. Crew does luxe for less
A look inside the retailer's new 640 dollar suit reveals the kind of details usually found only on high-end haberdashery. (more)