A cruel September for 5 bank CEOs 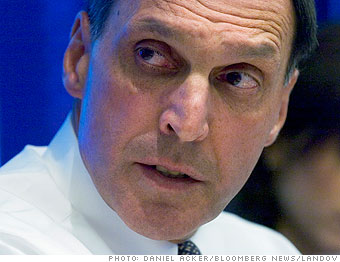 Unlike many of his fellow CEOs - E. Stanley O'Neill of Merrill Lynch and Ken Thompson of Wachovia - Fuld made it to the end after spending more than 30 years at Lehman. He left with his reputation in tatters, largely blamed for bad bets on mortgage-backed securities and a sluggish response to the bank's unfolding crisis. But Fuld didn't leave empty-handed: Lehman gave him a $22 million bonus in March, and he pocketed about $500 million while leading the company.

Hank's last stand
The ousted AIG chief is set on reclaiming his good name. Inside the last chapter of this strange tale. More

I was lucky to get out
Losing a job at an investment bank that soon went under may have been another lucky break for Erin Callan. More