Here's a strictly nonscientific list of top software programs for the iPhone. Be warned: The picks are subject to change...hourly. 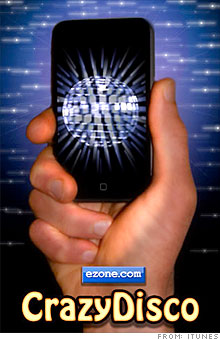 Price: $.99
Developer: Ezone
What it does: Revitalize the dullest of office parties with this rotating, sparkling disco ball, advertised by Ezone as a "great conversation starter." But there's more than one way to get down: developer Aaron Berk sells a rival app called "Disco Ball."
By Mina Kimes, reporter
NEXT: iBeer
Last updated September 23 2008: 5:20 PM ET
Email | Print |

7 cool new smartphones
Once reserved for business executives, smartphones today are thinner, sleeker and available in colors like pink and aquamarine. More

What's everyone yelping about?
Or is it digging? Or ninging? Zyng-ing? A rundown of some Web 2.0 startups getting a lot of buzz. More