These culinary powerhouses use sustainable, locally grown produce to bring their dishes to the next level. Meet a half dozen under 40, chosen by the Mother Nature Network. 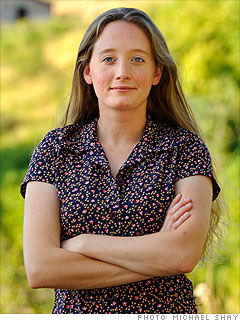 Brittany Baldwin's idea for a catering business was simple: serve clients meals made from her own garden and farm. So simple, it seemed, that no one had bothered to do it. "I tried to find something like it on Google but nothing popped up," says Baldwin, "so I knew it was unique."

Costing about $200 a week for a family of four, Baldwin arranges personal meals. Instead of ordering pizza, for example, she'll make a family dinner that looks something like this: mixed greens with goat cheese, chicken breasts stuffed with local mushrooms, and chocolate crepes filled with mousse. "`Locavore' was just coming on the scene -- I thought that was a perfect match," she says.

Baldwin's idea spread throughout Portland and she now has a waiting list longer than six months. A typical customer might be a young family of four that is too busy to organize dinner; or a grandmother following new dietary restrictions; or a wealthy couple who wants to entertain guests with fresh, local produce. "All the time and realize how lucky I am," says Baldwin." I wake up, I go out in garden, and I pull the order."