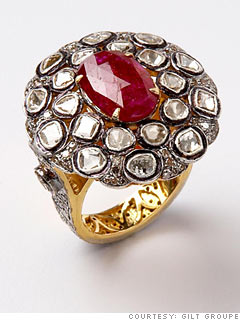 What it offers: 24-hour 70%-off sales start each day at noon. The site earns more than 60% of its daily revenue within the first hour.

Who's selling: Some 300 brands, including Thakoon, Gryphon, Marc by Marc Jacobs

Like most of these sites, Gilt is invitation-only, but if you're savvy enough to e-mail customer service, you're cool enough to join the club.