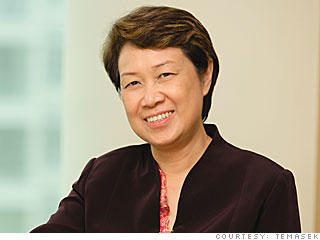 CEO of the world's 11th largest sovereign investor, Ho, 57, manages a portfolio of $133 billion in assets, up by 42%, a new year-end high. With nearly 80% of the portfolio exposure in Asia, she is focusing on secular long-term investments in the region, a strategy that helped Temasek weather the crises.

The wife of the prime minister of Singapore, Ho transformed Temasek after joining as a director in 2002, diversifying its holdings from the local Singapore market to India, China and beyond.

She started her career in 1976 with the Singapore Ministry of Defense before she joined Singapore Technologies and worked her way up to become its CEO.

In 2009, she received the Medal of Commendation (Gold) Award for her support of the work of unions and for safeguarding workers' interests in Singapore.

In its last fiscal year, Temasek made a total of SGD$ 10 billion in new investments.