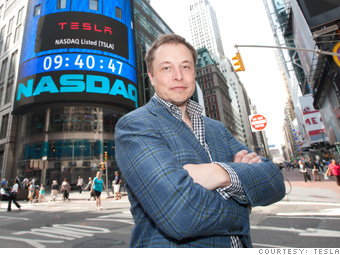 Half off pays in full for Groupon
Co-founder and CEO, Tesla; founder/CEO, SpaceX; chairman, SolarCity
Age: 39
Rank change: New
Industry: Automotive
Some predicted the death of electric-car maker Tesla, but the naysayers had to bite their tongue this past year when Tesla struck a partnership with Toyota in May and then pulled off a $226 million IPO in June. Whether you like his brash style or not, Musk has made the electric car a reality and forced mainstream automakers to respond.

Tabloid fodder: His recent divorce and personal cash-flow problems were popular topics of online gossip, as was his marriage to British actress Talulah Riley. He can avoid the spotlight if he fulfills his goal to retire some day to Mars (yes, really).

NEXT: 17. Boaz Weinstein
Last updated October 14 2010: 1:25 PM ET
40 under 40
Highest paid under 40
Which young executives at public companies brought home the most bacon this year? And exactly how much bacon are we talking about? More
Where is the economy heading?
This year's innovators offer their economic predictions for the next few years and beyond. More
Ones to watch
They may not have made the list this year, but we're keeping an eye on these rising stars. More