Meet this year's class of youthful movers and shakers. They're innovating, they're expanding, and they're not really thinking about the recession. 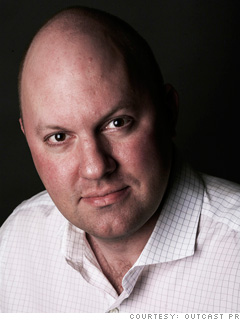 Half off pays in full for Groupon
Co-founder, Netscape, Opsware, Ning, Andreessen Horowitz
Age: 39
Rank change: Up
Industry: Technology
Long before there was a Zuckerberg, Andreessen helped create the building blocks of the web; his Mosaic led to the first commercial browser. Andreessen faded from the scene for a time after Microsoft squashed Netscape, but he's back now: A-list venture capitalist and director at Facebook, Skype, and Hewlett-Packard, where he served as the public face of the angry board in dismissing CEO Mark Hurd.

TV addiction: Mad Men. Andreessen had a bar installed in his new office and owns a record player that appeared on the show.

NEXT: 2. Mark Zuckerberg
Last updated October 14 2010: 1:25 PM ET
40 under 40
Highest paid under 40
Which young executives at public companies brought home the most bacon this year? And exactly how much bacon are we talking about? More
Where is the economy heading?
This year's innovators offer their economic predictions for the next few years and beyond. More
Ones to watch
They may not have made the list this year, but we're keeping an eye on these rising stars. More