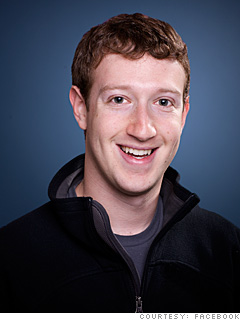 Half off pays in full for Groupon
Founder and CEO, Facebook
Age: 26
Rank change: Same
Industry: Technology
Even as Aaron Sorkin's film, The Social Network, portrays a certain fictional Harvard dropout with a mean streak, the real Mark Zuckerberg has made good on his goals this year: Facebook will pull in more than $1 billion in revenue; he unveiled a suite of new social tools; and despite a privacy backlash, the number of active users has jumped to an almost unfathomable 500 million; Facebook has surpassed Google to become the most trafficked site on the web.

NEXT: 3. Evan Williams and Biz Stone
Last updated October 14 2010: 1:25 PM ET
40 under 40
Highest paid under 40
Which young executives at public companies brought home the most bacon this year? And exactly how much bacon are we talking about? More
Where is the economy heading?
This year's innovators offer their economic predictions for the next few years and beyond. More
Ones to watch
They may not have made the list this year, but we're keeping an eye on these rising stars. More