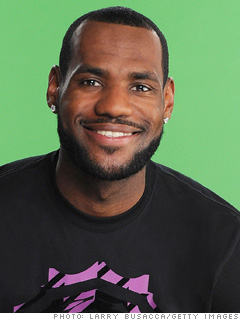 Half off pays in full for Groupon
Forward, Miami Heat
Age: 25
Rank change: New
Industry: Sports
How many people can stop the pulse of a country? James's primetime signing with Miami this summer was slammed as a publicity stunt, but his brand emerged unscathed. It was the latest marketing bonanza seeded by his own company, LRMR, which James and high school friends have built over four years. LRMR has brokered James's deals with McDonald's and State Farm; a Sports Illustrated tally ranks him No. 4 on its list of top-grossing athletes, with an estimated $42.4 million this year.

NEXT: 21. Ryan Kavanaugh
Last updated October 14 2010: 1:25 PM ET
40 under 40
Highest paid under 40
Which young executives at public companies brought home the most bacon this year? And exactly how much bacon are we talking about? More
Where is the economy heading?
This year's innovators offer their economic predictions for the next few years and beyond. More
Ones to watch
They may not have made the list this year, but we're keeping an eye on these rising stars. More