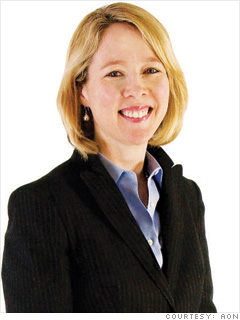 Half off pays in full for Groupon
CFO, Aon
Age: 39
Rank change: New
Industry: Finance
After working at McKinsey and attending Harvard Business School as a Fulbright scholar, Davies found her calling at Microsoft, where she rose to be CFO of its platform and services division. In 2007 she joined Aon, the world's largest insurance broker, and has orchestrated its biggest deals ever, including its $5 billion acquisition of Hewitt Associates this summer -- all without losing Aon's strong credit rating.

NEXT: 24. Lorenzo Simonelli
Last updated October 14 2010: 1:25 PM ET
40 under 40
Highest paid under 40
Which young executives at public companies brought home the most bacon this year? And exactly how much bacon are we talking about? More
Where is the economy heading?
This year's innovators offer their economic predictions for the next few years and beyond. More
Ones to watch
They may not have made the list this year, but we're keeping an eye on these rising stars. More