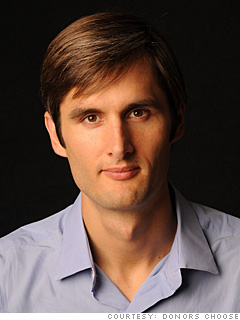 Half off pays in full for Groupon
Founder and CEO, Donorschoose.org
Age: 35
Rank change: Up
Industry: Nonprofit
At any given moment, 20,000 project requests from public school teachers are on Best's donorschoose.org waiting to be funded by ordinary people. Since the former history teacher launched the nonprofit 11 years ago, donors have given $70 million to 147,000 projects. Many may get a boost from this fall's documentary about the U.S. education crisis, Waiting for Superman; Best raised funds from donors like Yahoo co-founder David Filo, eBay founder Pierre Omidyar, and Twitter's Biz Stone so that every filmgoer would receive a $15 gift code to make a donation on the site.

NEXT: 27. Chris Cox, Mike Schroepfer, and Bret Taylor
Last updated October 14 2010: 1:25 PM ET
40 under 40
Highest paid under 40
Which young executives at public companies brought home the most bacon this year? And exactly how much bacon are we talking about? More
Where is the economy heading?
This year's innovators offer their economic predictions for the next few years and beyond. More
Ones to watch
They may not have made the list this year, but we're keeping an eye on these rising stars. More