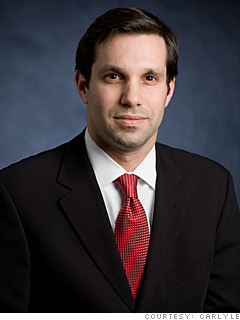 Half off pays in full for Groupon
Managing director, Carlyle Group
Age: 37
Rank change: New
Industry: Finance
Palmer joined Carlyle in 1996 and focused on the industries that put the firm on the map -- aerospace, defense, and government services. The skilled navigator of Wall Street and Capitol Hill was discovered while working at Lehman Brothers by Carlyle co-founder Bill Conway (Palmer was working on an IPO for Carlyle). His deals have been consistent hits, and insiders say he could someday be part of the elite team that leads the firm.

Sibling bailout: Finance has been kindest to Palmer, whose brother and sisters worked, respectively, at now defunct Lehman, Bear Stearns, and Merrill Lynch.

NEXT: 36. Phillip Lim and Wen Zhou
Last updated October 14 2010: 1:25 PM ET
40 under 40
Highest paid under 40
Which young executives at public companies brought home the most bacon this year? And exactly how much bacon are we talking about? More
Where is the economy heading?
This year's innovators offer their economic predictions for the next few years and beyond. More
Ones to watch
They may not have made the list this year, but we're keeping an eye on these rising stars. More