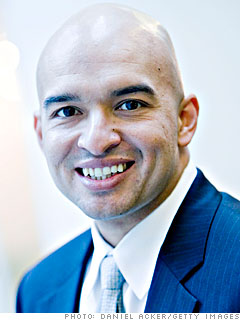 Half off pays in full for Groupon
President, Wal-Mart West
Age: 39
Rank change: Up
Industry: Retail
El Paso native Vazquez moved to San Francisco during the dotcom boom but ended up at an old giant, joining Walmart.com in 2002 and becoming its CEO in 2007. In January he was promoted to run all of Wal-Mart West, one of three U.S. divisions. Though the company doesn't break out regional sales, total U.S. revenue last year was $258 billion, so it's safe to say the Stanford engineer has a lot on his shoulders.

NEXT: 5. Sergey Brin and Larry Page
Last updated October 14 2010: 1:25 PM ET
40 under 40
Highest paid under 40
Which young executives at public companies brought home the most bacon this year? And exactly how much bacon are we talking about? More
Where is the economy heading?
This year's innovators offer their economic predictions for the next few years and beyond. More
Ones to watch
They may not have made the list this year, but we're keeping an eye on these rising stars. More